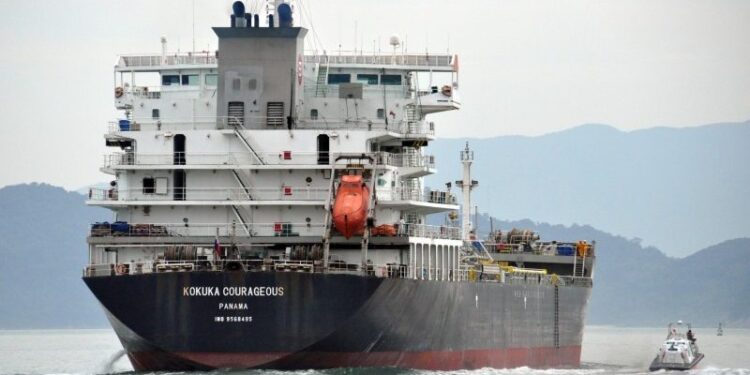 Above image is used for illustration purposes only / Credit: Shipspotting

The product tanker ‘Kokuka Courageous’, one of the two ships that became subject of attacks on Thursday while transiting the Strait of Hormuz, is now safely under tow in the Gulf of Oman heading towards Khor Fakkan, UAE, the ship’s manager Bernhard Schulte Shipmanagement (BSM) said in an official update Friday.

The tanker was damaged in a “suspected attack” that breached the hull on the starboard side, above the water line, while on passage from Saudi Arabia to Singapore, on 13 June. There were no injuries or pollution, but the crew evacuated the vessel as a precaution.

As informed, one crew member was slightly injured in the incident and has received first aid treatment. He is now back on board the Kokuka Courageous.

US fires warning shots at Iranian boats in Strait of Hormuz

Another similar incident was reported at the same time in the region, involving the tanker ‘Front Altair’ which caught a fire as a result of the suspected attack. Both vessels remained adrift.

The news of two subsequent suspected attacks against two different ships in the Gulf of Oman Thursday morning made headlines amid an ongoing tension in the Middle East and only a month after a similar incident in which four tankers in the region were struck.