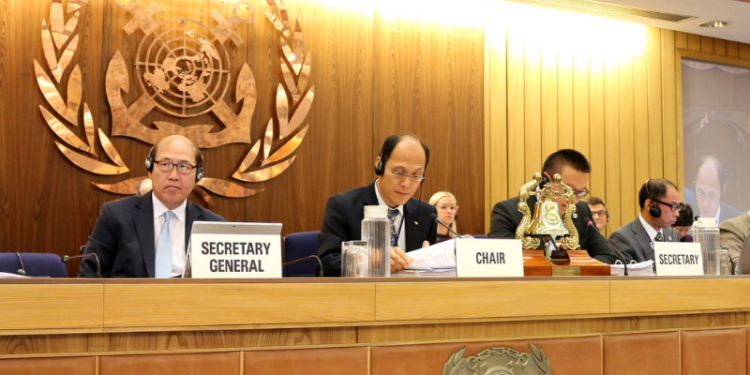 The 5th session of IMO’s Sub-Committee on Carriage of Cargoes and Containers (CCC), held on 10-14 September 2018, addressed key shipping safety issues related to dangerous cargo. Among the highlights was that the Sub-Committee agreed amendments to IGF Code and IMSBC Code, as well as draft interim guidelines for the safety of ships powered by methanol.

Gas and other low-flashpoint fuels provide for a cleaner atmosphere as they emit very low levels of air pollutants, but they also pose their own safety challenges. The International Code of Safety for Ships using Gases or other Low-flashpoint Fuels (IGF Code), which entered into force on 1 January 2017, aims to minimize the risk to ships, their crews and the environment, given the nature of the fuels involved.

New ships using gases or other low-flashpoint fuels are required to comply with the IGF Code, which contains mandatory provisions for the arrangement, installation, control and monitoring of machinery, equipment and systems using low-flashpoint fuels, focusing initially on LNG.

The CCC Sub-Committee has been tasked with keeping the IGF Code up-to-date and developing amendments or other guidelines in relation to other types of fuel.

The Sub-Committee agreed, in principle, to draft interim guidelines for the safety of ships using methyl/ethyl alcohol as fuel. The MSC was invited to refer specific paragraphs to other technical sub-committees for consideration and advice to CCC 6.

The detailed interim guidelines are intended to provide requirements for the arrangement, installation, control and monitoring of machinery, equipment and systems using methyl/ethyl alcohol as fuel to minimize the risk to the ship, its crew and the environment, taking into account to the nature of the fuels involved.

Specific sections to be referred to other sub-committees for consideration concern:

–> Use of low flashpoint diesel as marine fuel

The correspondence group was also instructed to discuss a proposal to carry out a formal safety assessment study for ships fueled by low-flashpoint diesel (i.e. diesel fuel with a flashpoint of less than 60°C) and report back to CCC 6.

The Sub-Committee agreed the next comprehensive set of draft amendments to the International Maritime Solid Bulk Cargoes (IMSBC) Code (amendment 05-19), to be submitted to the MSC 101, in mid-2019, for adoption, following finalization by the Editorial and Technical (E&T) Group.

The 2019 amendments include updates to various schedules, such as new individual schedule for BAUXITE FINES as a Group A cargo, as well as editorial amendments.

The amendments will be incorporated into a consolidated IMSBC Code, to include all amendments to date, since the IMSBC Code was first adopted in 2008.

–> Carriage of ammonium-nitrate based fertilizer

The Sub-Committee agreed to divide the existing schedule for ammonium-nitrate based fertilizer into two schedules:

Potential problems with ammonium-nitrate based fertilizer had been identified following accidents involving the MV Purple Beach (2015) and MV Cheshire (2017). The recommendations arising from the investigation into the MV Cheshire casualty were presented to the Sub-Committee.

The issue will be further considered by CCC 6 in 2019 and the revised schedules could be included in the  future IMSBC amendments (06-21).

–> Cargoes which may liquefy and other related phenomena

The Sub-Committee discussed amending the IMSBC Code definition of Group A (cargoes which may liquefy) to include phenomena other than liquefaction.

This follows research by the Global Bauxite Working Group, which identified a newly identified phenomenon affecting some bauxite cargoes, known as dynamic separation, which can cause instability of  cargo and ship.

The Sub-Committee agreed that the definition should be amended and instructed the E&T Group to further consider this issue, with the aim of incorporating related amendments in a future set of amendments to the IMSBC Code after 2019 (amendment 06-21).

–> IMSBC model course to be developed

The Sub-Committee agreed draft terms of reference for the development of a model course for the IMSBC Code intersessionally, with a view to its validation at CCC 6.

The Sub-Committee agreed draft interim guidelines on the application of high manganese austenitic steel for cryogenic service, for submission to MSC 100 in December 2018 for approval.

LNG is cooled to very low temperatures for carriage. The interim guidelines are aimed at ensuring the safety of ships carrying or fueled by LNG, by specifying the requirements for the utilization of high manganese austenitic steel in the design and fabrication of cargo and fuel tanks complying with the IGC and IGF Codes.

Austenitic steels, known to resist corrosion, are non-magnetic stainless steels that contain high levels of chromium and nickel and low levels of carbon.

The Sub-Committee also approved draft amendments to the IGC and IGF Codes concerning tensile tests for materials other than aluminium alloys, with a view to approval and subsequent adoption by the MSC.

A correspondence group was re-established to look at the procedure for considering and approving alternative metallic material for cryogenic service in the IGC and IGF Codes; and gather and evaluate information and data on any practical experience gained with design and production when using high manganese austenitic steel for cryogenic service. The group will report back to CCC 6.

The Sub-Committee agreed, for approval by MSC, draft unified interpretations of the IGF and IGC Codes related to the categorization of gas admission valves at dual fuel engines and gas engines (section 12.4 of part A-1 of the IGF Code).

The Sub-Committee discussed potential draft amendments to the Code of Safe Practice for Cargo Stowage and Securing (CSS Code) related to weather-dependent lashing, aimed at ensuring the highest level of cargo securing, taking into account expected weather and other factors. The amendments would concern chapter 13 of the CSS Code, related to Methods to assess the efficiency of securing arrangements for non-standardized cargo.

It was agreed, following discussion in a working group, that further detailed consideration of the matter was needed since the proposed amendments could have consequential implications for other cargo-related IMO instruments.

A correspondence group was established to further consider the reduction curve for basic accelerations due to significant wave height regarding weather-dependent lashing; further consider draft amendments to annex 13 to the CSS Code; identify cargo-related IMO instruments, if any, which might be impacted; and submit a report to CCC 6.