JTSB investigation: Lack of cargo-hold-work system linked to fatality of worker onboard 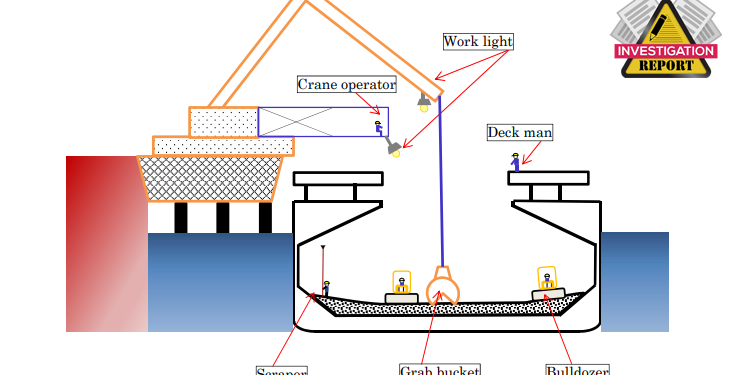 State of the cargo-hold-work (as seen from bow side) / Credit: JTSB

JTSB issued an investigation report on the fatality of a worker onboard the cargo ship “ISHIZUCHI”, while unloading cargo at Niihama Port. The worker was hit by a bulldozer in the hold and died at around 03:39 on January 17, 2019.

Of the two deck men, the deck man who had already been working (Deck Man B) ordered the Worker to enter the hold at around 02:30 on 17, and then put two bulldozers (Bulldozer A and Bulldozer B) into the hold one after another, whereby the cargo-hold-work was started.

At about 03:20, Deck Man B took over a command of work on the upper deck of the Vessel from Deck Man A.

Operator A positioned on the starboard side and the operator of Bulldozer B positioned on the port side (Operator B) both confirmed that the Worker, after doing scraping work from the bow to the vicinity of the fifth frame on both sides by using a stick with a metal plate attached to the tip of this approximately 6 m-long bamboo stick had returned to a landing near the spiral staircase near the bow surrounded by handrails.

Before this accident occurred, Operator A, Operator B, and Deck Man A had recognized the Worker holding a stick in the waiting place, but they did not notice that the Worker had later moved out of this place with the stick in his hand.

At around 03:39, Operator A turned Bulldozer A to the stern and, while moving forward and backward, he was collecting coal on the starboard side into the center of the hold.

Operator A, while moving backward near the starboard wall with his face turned to the right rear, noticed that a stick was leaning against the wall on the starboard side, which was on the left front of Bulldozer A.

Then, when Operator A stopped Bulldozer A once and moved a little backward, he found the Worker had fallen down in front of Bulldozer A and shouted out to Deck Man A on the upper deck to call for an ambulance. Operator B thought something was unusual because Bulldozer A stopped operating.

Then, he rushed in to acknowledge that the Worker was lying there unconscious. He was diving into the coal piled up as high as the surroundings near the center of the wall on the starboard side, with his head facing the port side.

The Worker was taken to the hospital after a lifesaving operation was carried out by the ambulance crew inside the hold. The post-mortem examination found he had died immediately due to multiple traumas.

The worker of Company A was unloading coal behind Bulldozer A in No. 5 hold in Niihama Port where the vessel moored during nighttime, Operator A thought there was nobody behind the Bulldozer A and thus moved it backward, causing the worker to be run over by Bulldozer A.

Deck Man A, who was paying attention to the contact between Bulldozer A and the grab bucket, did not notice the positional relationship between the Worker and Bulldozer A, and there was no system established for the cargo-hold-work that enables the bulldozer to stop immediately in response to the position and actions of the Scraper, as a result of which it is probable that this accident occurred.

The company A has put together safety work procedures for the cargo-hold-work and has made the signals and actions of the Scraper and heavy equipment operators in the hold thoroughly well-known as well as it has taken measures for keeping the Scraper out of places where a danger of contact may arise between the Scraper and vehicle-type construction machinery in operation.

Accordingly, the implementation of the following measures would help to prevent recurrence of a similar accident, etc.: