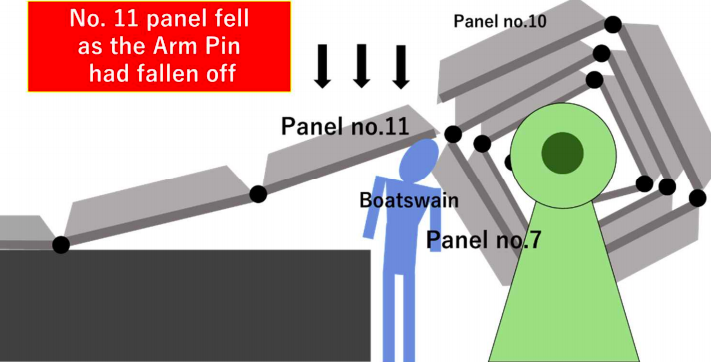 The Situation at the Time of the Accident / Credit: JTSB

While the cargo vessel FIRST AI was mooring off Kyoto in September 2019, a boatswain died as his head was trapped in a hatch cover panel while performing hatch cover closing duty. JTSB issued an investigation report on the accident.

A master, Officer A, a chief engineer, a boatswain, and six other crew members boarded the Vessel. While the ship was mooring at Maizuru Port in Kyoto, at around 10:45 on September 9, 2019, Officer A and the boatswain began closing the hatch covers in preparation for departure after finishing the unloading tasks.

Officer A was checking the condition of the rubber packing after the hatch cover stopped moving. Then, the Arm Pin fell off and hit his right hip, so he turned to where the Arm Pin was inserted. At where the arm pin had fallen off, he noticed that the boatswain’s head was caught between panel No. 11 (about 2.5 tons), which had fallen, and panel No. 7 which is already stored in the drum. He called out loudly for other crew members to come, and asked the stevedore who came to the scene to call an ambulance.

The helmsman was in his room when he heard Officer A shouting and rushed to the scene of the accident. He confirmed that the head of the boatswain was caught between two hatch cover panels, reported the accident to the second officer in the chart room, and called the chief cook and the ordinary seaman.

The second officer reported that the boatswain was injured to the master and immediately went to the scene of the accident. The helmsman and the chief cook transported the boatswain to the nearby corridor of the living quarter.

JTSB finds probable that, as the boatswain received instruction from Officer A, he stopped winding up the drum for the closing of the hatch cover after the Vessel had unloaded the cargo. Afterward, the boatswain passed through the space, and the Hinge Plate bent outward horizontally, the Key Plate flaked off, and the Arm Pin, which was no longer restrained, fell off, causing panel No. 11 of the hatch cover to fall. As a result, his head was caught between panel No. 11 and panel No. 7, which was already stored in the drum.

The reason why the boatswain passed through the space, although he had been warned not to do so before the accident, could not be clarified.

It is probable that the bent of the Hinge Plate occurred because the hatch cover was opened and closed after the temporary repair took place on the Vessel without taking account of the residual stress.

It is probable that it is useful for the following measures to be implemented to prevent the recurrence of similar accidents:

In view of the results of this accident investigation, the Japan Transport Safety Board recommends that the management company of FIRST AI takes the following measures to prevent reoccurrence of a similar accident: