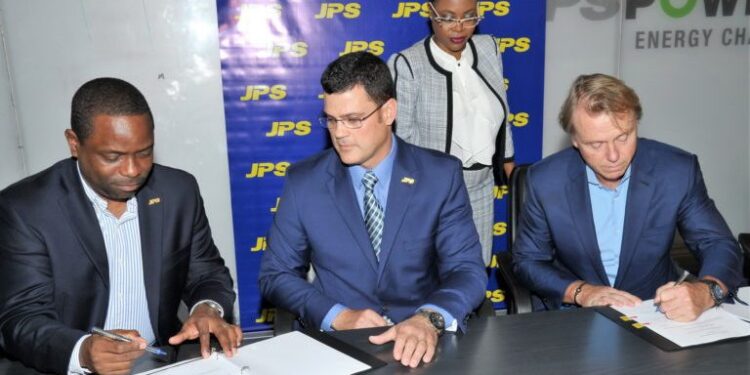 Jamaica’s JPS has signed a Power Purchase Agreement with New Fortress South Power Holdings Ltd., which will be constructing a 94MW power plant on the grounds of the JAMALCO bauxite operations in Clarendon.

The plant will use Liquefied Natural Gas (LNG), and will be the third such power generating facility, to be constructed in Jamaica. The other two are the JPS Bogue Power Plant in St. James and the 190 MW Plant, which is being constructed in Old Harbour Bay, St. Catherine.

JPS President and CEO, Emanuel DaRosa, in addressing the signing ceremony, expressed his pleasure with the development, noting that the introduction of the plant will, “reduce emissions, lower costs and provide some protection from future oil price increases.”

Mr DaRosa also informed the audience that JPS has been investing approximately US$65M per year, over the past five years, in improving the network, which will now be increased to about  US$100M this year.

Founder and Chairman of New Fortress Energy, Wes Edens, noted that New Fortress has been committed to playing its part in the development of the Jamaican economy – first through the delivery of gas to the Bogue Power Plant, followed by the critical gas delivery infrastructure for the 190MW plant underway in St. Catherine.

“This is a third, very meaningful step, for us to be constructing and owning a power plant ourselves – and all of this is going toward the goal of clean energy, reliable energy and most importantly, the creation of jobs and community development,” he stressed.

The construction of the New Fortress South Power Holdings plant is scheduled to commence in 2018, and is expected to employ up to 500 persons.