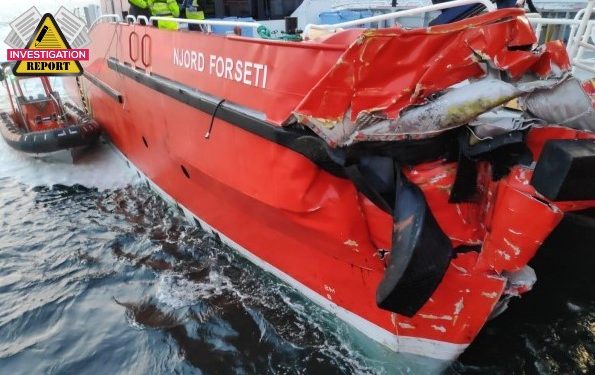 The vessels operating records show that on the 23rd April the vessels crew commenced work at 0800 LT. On the 22nd April, the vessel operated for 11 hours 15 minutes, finishing operations at 19:30. On the 21st April the vessel was not in use due to high winds. Between 20th – 18th April, records indicate that the vessel was not in use for more than 12 hours per day. Subject to the emergence of other evidence to the contrary, it is considered that the vessels programme in the days prior to the accident would have allowed the crew members to obtain sufficient rest prior to taking up their duties on 23rd April.

The ships engineer stated that he was in the wheelhouse for the passage back to Emshaven from the windfarm. He also stated that the vessel had previously experienced a failure of the port engine which had stopped without alarm or warning earlier in the day. To identify possible reasons for this, he was concentrating on the engine data screens located on the starboard side of the wheelhouse to identify any change to machinery parameters that may precede an involuntary shutdown.

CCTV coverage from the vessel clearly shows the vessel approaching the windfarm tower and the impact with the tower on the starboard bow.

CCTV coverage also shows the central part of the wheelhouse interior. Prior to the impact, the only person within shot is the Master who is seated at the centre console. However, the engineer is also seated on the starboard seat but is obscured from view by the seat back. This is commensurate with his report that he was looking intently at the engine screens in front of him. The positioning of these screens low down on the console suggests that a crouching position might be beneficial to gain a close view of these items. It is only at the point of impact that the CCTV shows the engineer being thrown out of his seat.

For the period of coverage sighted by the undersigned up to the point of impact (approx. 1 minute) the Master was seen to be leaning over the starboard side of his seat, with his attention being almost entirely taken by something in this area. It is not entirely clear for how long he had adopted this position. The company reports that CCTV coverage suggests that this posture was adopted for at least 2 minutes.

Although he adjusts his position during the footage, it cannot be determined objectively what task the master was engaged in. In the seconds immediately before the impact the master’s attention is drawn to the wheelhouse front and at the point of impact, the CCTV coverage also shows him being thrown out of his seat. Shortly after the impact, the CCTV shows the engineer moving across the wheelhouse to check on the Master.

As has been acknowledged in the Njord commissioned incident report, CCTV footage of the turbine tower in the seconds before impact shows a slick orientated approximately in a WSW direction which suggests current flow in this general direction. It is therefore possible that when transiting between windfarms Borkum Riffgrund 1 and 2, insufficient allowance was made for this tidal set.

To the starboard side of the master’s seat is a console to which engine and vessel controls are fitted. Engine panels are fitted at the high level on the vertical panel, and on the horizontal surface is fitted with a VHF radio. It is possible that the Master was distracted by this piece of equipment, although the CCTV coverage suggests that the Master was not using it for communication.

In the Njord commissioned incident report, the engineer reported that following the impact when he tried to use the VHF to summon assistance, the unit was not on its usual setting but was displaying a different screen. This supports the possibility that the Master may have been making adjustments to the settings of the set immediately prior to the incident.

#2 Consideration of passage planning and monitoring

A generic passage plan exists for the transit between the base port of Emshaven and the Merkur windfarm. This forms part of the route plan for the vessel when operating in HS OSC Mode. The passage plan places a waypoint to the east of the windfarm and to the north east of the transit route between windfarms Borkum Riffgrund 1 and 2. Once on site and working within the windfarm there are no specific passage plans in place for moving around the area. This is most probably due to the large number of different towers and discreet locations visited during a typical day of operation.

Had the transit been successful it is assumed that the vessel would have joined the desired track specified by the generic passage plan at some point to the south east of Borkum Riffgrund 1.

The methods for monitoring the vessels position, course and track by visual means and using the vessels navigation aids prior to the incident have not been provided to the undersigned and therefore have not been positively determined. The extent to which the direction and strength of tidal current through the windfarm was known to the Master has also not been able to be determined.

11.1 The vessel suffered significant structural damage to the starboard hull in the forward area. Shock from the impact resulted in the fracturing of the mounting arrangements between accommodation structure and the deck. Bridge equipment was damaged due to the impact from the master and engineer being forcibly ejected from their seats by the impact. It is likely that other damage may be identified when the vessel is subject to repair.

For an indeterminate period between departure from the windfarm until the allision occurred, the vessel was not keeping a proper look out as required by Rule 5 of the International Regulations for Preventing Collisions at Sea (COLREGS).

The primary reason why a proper lookout was not being kept was because the Master, who had the conduct of the vessel was distracted from this primary role.

It is possible that the Master was distracted from his primary role as he may have been adjusting of settings on the VHF radio which is mounted immediately to starboard of his seat. However, this has not been positively determined and distractions caused by other means cannot be ruled out.

At the time of the incident the vessel was not following the established passage plan from the Merkur Offshore Windfarm to Emshaven but was undertaking an alternative route between Borkum Riffgrund 1 and Borkum Riffgrund 2 windfarms. Whilst this route was safe, ineffective monitoring of the vessels track, position and proximity to navigational hazards contributed to the incident.

Reports of the actions taken by the vessel and company immediately following the incident is considered appropriate to the circumstances.