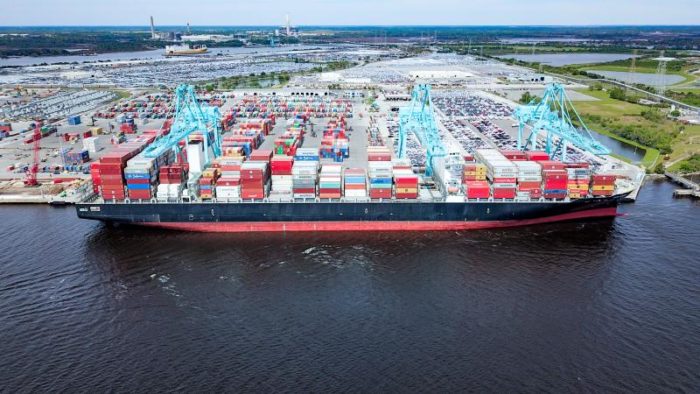 Above image is used for illustration purposes only / Credit: JAXPORT

Jacksonville, the biggest container port in Florida, achieved record volumes in containers, vehicles and overall tonnage throughout the fiscal year 2019. The port moved more than 1.3 million TEU containers, representing a 5% growth than the previous year.

According to data provided by the Jacksonville Port Authority (JAXPORT), this is the 4th year in a row that the port sets a record in volume containers.

Additionally, Jacksonville moved the most vehicles in its history, nearly 696,500 total units, keeping its position as one of the nation's busiest vehicle handing ports.

Strong auto sales in the Southeast US, combined with growing global demand for previously owned vehicles, contributed to the growth,

Meanwhile, the growth of cargo volumes fueled another record achievement for the port, since 10.9 million tons of total cargo where moved last year, up to 4% during 2018.

Major advancements for the port's development were also announced for the fiscal year of 2019. The previous month, Florida Department of Transportation awarded to JAXPORT the amount of 35.3 million for the "Jacksonville Harbor Deepening project".

With a non-stop funding, port deepening is ongoing and it is estimated to be completed in 2023.

As for the cruise business, the port welcomed about 195,000 cruise passengers, just shy of the previous year’s record of 199,000 passengers.

Earlier in 2019, terminal operator SSA Atlantic collaborated with the JAXPORT to set a vessel turning basin and deepwater access of 47 feet.

Located in the Southeastern US at the crossroads of the nation’s rail and highway network, JAXPORT is the global gateway to Florida, the nation’s third-largest state.