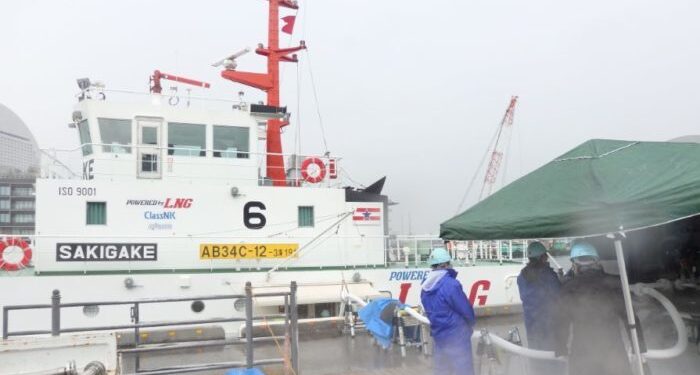 According to a recent statement, the tugboat Sakigake, Japan’s first LNG-fueled vessel, was supplied with LNG as fuel for the 100th time since its delivery in 2015.

In fact, the LNG bunkering was conducted safely and efficiently from a tank truck at the No. 5 quay of Shinko, Yokohama.

The vessel is owned by NYK and operated by Shin-Nippon Kaiyosha, an NYK Group company.

It is said that NYK is making use of the expertise and know-how the company has obtained through LNG transportation over the years to expand its wide range of businesses to LNG-fuel supply and sale. The company is thus making a proactive effort to shift to LNG-fueled vessels as one solution to environmental concerns.

What is more, in November, the Japan Times reported the country’s aspiration on accelerating the switch to IMO-compliant fuel, such as natural gas fuel for its shipping fleet, and its halt on establishing a refuelling hub in Asia.

Japan Times comments that although some places, as Yokohama, enable LNG supply to vessels through trucks and pipelines onshore, LNG-powered vessels most of the times refuel when they stop at ports during their loading and unloading operations, highlighting the urgency of constructing LNG supply vessels.

will continue its efforts to reduce the company’s environmental load and contribute to the realization of a sustainable society.

This operation was the first LNG bunkering in the Setouchi and Kyushu areas of western Japan and advances the four companies’ discussions on the commercialization of a new business in the area.