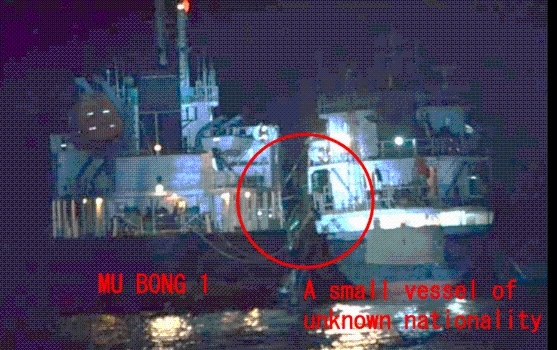 The Japanese Ministry of Foreign Affairs identified another foreign vessel suspected of conducting illegal ship-to-ship transfers in cooperation with North Korean tankers, an action which Japan reported to the Security Council Committee (Panel of Experts) and shared information with related countries.

Specifically, on November 13, during dawn, a JS ‘Sendai’ of Japan Maritime Self-Defense Force found that MU BONG 1, North Korean-flagged tanker, was lying alongside a small vessel of unknown nationality on the high seas, about 280 km eastern offshore of Shanghai, in the East China Sea.

In vision of both vessels’ position, as they were caught laying alongside each other and having their hoses connected, there was a high possibility that the vessels had been engaged in some type of activity.

Consequently, after a comprehensive assessment, the Japanese Government strongly suspects that these vessels were conducting ship-to-ship transfers, an action that has been banned by United Nations Security Council Resolution.

For the time being, the Mu Bong 1, though connected with North Korean entities, has not been explicitly added to the U.S. list.

Overall, high seas petroleum transfers to North Korean vessels are prohibited under U.N. Security Council economic sanctions on Pyongyang’s nuclear program. The United Nations and the United States have designated dozens of vessels and entities (including non-North Korean nationals) in connection with alleged violations of these sanctions.

In tackling illegal S-T-S operations, the American naval and coast guard authorities contribute to the sanctions monitoring operations in the East China Sea.