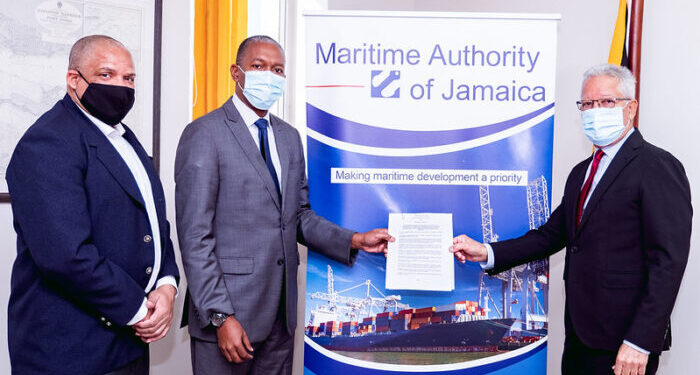 On behalf of the Jamaican Government, MAJ Director General, Rear Admiral (ret’d) Peter Brady, signed the MOU during a ceremony conducted online due to pandemic restrictions. Nancy Karigithu, the Principal Secretary in the Kenyan State Department of Shipping and Maritime, signed on behalf of the Republic of Kenya, accompanied by Robert Njue, the newly-appointed Director General of the Kenya Maritime Authority.

The Maritime Authority of Jamaica signed a Memorandum of Understanding (MoU) with the Republic of Kenya to enable reciprocal recognition of STCW certificates for seafarers for their nationals.

According to the MoU, Jamaican seafarers are able to serve on Kenyan-flagged vessels, and vice-versa. The joint committee’s mandate is not limited to the review of the implementation of the undertaking but extends to conducting joint studies in the field of maritime transport and facilitating discussions of maritime safety, security, education and training.

It is added that the Convention, through a reciprocal provision, affords the employment of nationals on any vessel which trades internationally and for countries to recognize the qualifications of other nations’ seafarers whom they may employ on their respective ships.

The Republic of Kenya, through the office of Ministry of Transport, Infrastructure, Housing Urban Development and Public works, State Department of Shipping and Maritime, Principal Secretary, requested to enter into a MOU with Jamaica to provide for reciprocal arrangements under the STCW Convention for their respective seafarers to work on board ships flagged by the two countries.

Jamaica has undertakings for the recognition of certification under the Convention with nineteen countries including the United Kingdom. This allows its nationals, who have been awarded Certificates of Competency (COC) by the Maritime Authority of Jamaica, to work on the ships of these countries with whom it has a reciprocal arrangement, through the facility of the STCW Convention.

This is a significant occasion for both our countries’ seafarers and indeed our respective maritime parent bodies and Governments as we utilize the facility of the International Convention on Standards of Training, Certification and Watchkeeping for Seafarers to allow our professional mariners to legally work on board the ships that are flagged by our two countries.