ITF: Shipowners should pay to save seafarers stranded off China 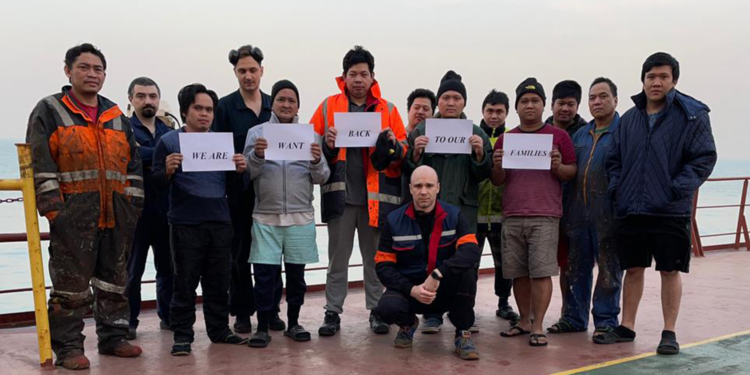 The crew of the MV Christine Oldendorff / Credit: ITF

As the 16 seafarers from the cargo ship MV Anastasia were finally released following months of being stranded onboard off China, the ITF called on shipowners to pay the millions of dollars required to get seafarers off ships which remain stranded off the Chinese coast due to the country’s informal Australian exports ban.

The MV Anastasia had been anchored near Caofeidian port since September 20, as Chinese authorities did not allow the ship to either dock or go for a crew change, citing COVID-19 restrictions. Similarly, over 60 ships are now estimated to be stranded off the coast of China, as a result of an ongoing trade dispute with Australia, bringing significant pressure to charterers and leaving more than a thousand of seafarers trapped onboard for months.

MSC has led the way by paying the necessary costs and penalties to charterers and cargo owners in order to rescue the crew of their ship, the Anastasia, and see them rescued from their six-month floating prison via a port in Japan,

According to ITF, the crew of the MV Christine Oldendorff have been anchored at Caofeidian in Bohai Bay, near Beijing, since 26 August 2020. Now eight months stranded, with 20 onboard for more than 18 months in total, they are desperate to get home to their families.

19 seafarers abandoned onboard off Iran for over 14 months

We call on all responsible ship owners to follow MSC’s lead and perform these long-overdue crew changes. It will be costly for these shipping companies, but it is absolutely necessary to preserve the health, lives and human rights of these seafarers.

The calls follow reports of attempted suicides involving desperate crew members onboard stranded ships. Latest reportrs revealed that one seafarer from MV Anastasia attempted suicide, as he was denied permission to return to India to look after his wife and two sons, who have been diagnosed with Covid-19.

A number of seafarers have already attempted suicide on these ships, desperate to end their ongoing suffering. Health conditions are worsening. Medical supplies are running low on some vessels. We are very concerned to hear reports that in some cases local Chinese authorities have blocked seafarers from accessing medical professionals, including urgently-needed hospitalisations,

More than 60 vessels are thought to still be unable to unload their Australian cargoes such as coal and undertake much-needed crew changes of the seafarers. A rising number of seafarers have been onboard vessels for longer than a year, with some as many as 20 months. Between three and six months of this time has been spent waiting off the Chinese coast.

Crumlin said that a long-term solution still required China to introduce protocols to allow for crew changes of all foreign seafarers. Until China brought in regular crew changes, he said, “shipping companies had a humanitarian duty to preserve the lives and welfare of seafarers employed on their ships by diverting ships to neighbouring countries.”

China has failed to put aside its bickering with Australia and respond to this man-made humanitarian disaster just kilometres from its coast. Australia, too, has too often put politics ahead of crew welfare. We call on the industry to step up where the governments have failed: show some leadership and get these desperate people off your ships. MSC has proven it is possible,