Italy to use military to guard merchant ships against pirates 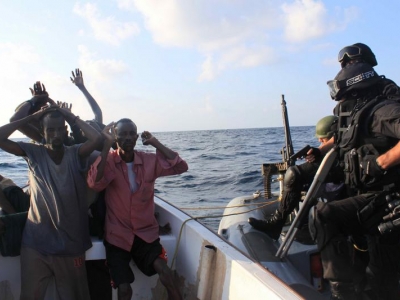 Decision after M/V Montecristo, an Italian cargo ship, was attacked by pirates

Italy is to station military forces on its merchant vessels to guard against attacks by Somali pirates, shipping sources said on Tuesday, the day after another of its ships was attacked off the anarchic east African country.

Many ships already carry private security contractors to try to prevent hijacks, but deployment of military forces on merchant vessels would mark a clear escalation in measures to combat piracy, which costs the world economy billions of dollars each year.

The sources said Defence Minister Ignazio La Russa would sign an agreement later on Tuesday with the confederation of Italian ship owners to put military guards on board vessels in the huge area of the Indian Ocean at risk from Somali pirates, who have hijacked several Italian ships.

The Montecristo, an Italian cargo ship, was attacked by five men in a small boat off the coast of Somalia on Monday, its owner the D’Alesio Group said. A pirate told Reuters by phone that it was under their control. The ship had 23 crew from Italy, India and Ukraine.

Somali pirates, operating from the shores of the lawless state in the Horn of Africa, have raked in millions of dollars a year in ransoms from scores of hijacked ships from around the world, including oil super tankers.

Last month the shipping industry called on the United Nations to create an armed military force to be deployed on vessels to counter the escalating menace from armed seaborne gangs.

While there has been a growing acceptance of using armed security guards, sovereign military forces are preferred by the shipping industry because they have clearer rules of engagement and the reduced risk of legal issues in the event of fatalities.

Better armed and increasingly violent pirate gangs are set to ramp up attacks in the coming weeks in the Indian Ocean as the monsoon ends.

Around 17 ships are currently being held by the pirates who can operate hundreds of miles from the Somali coast.

Negotiations often take many months before the ships and crews are released for ransom. The Socotra 1, a Yemeni-owned ship, was seized on Christmas Day 2009 and is still being held.

A spokesman for the D’Alesio group old Reuters on Tuesday there had been no contact with the crew since the apparent hijacking.

“What interests us at the moment is to bring the members of the crew to safety,” Nello D’Alesio, the group’s Vice President, said in a statement on Monday night.

The ship left Liverpool on Sept. 20 heading for Vietnam, and passed through the Suez canal at the beginning of October. It was escorted by a Japanese warship — part of an international anti-piracy force in the area — as it crossed the Gulf of Aden.

While naval patrols, including vessels from the European Union, the United States and other nations such as South Korea, Iran and Turkey, have curbed the number of attacks in the Gulf of Aden, piracy in the Indian Ocean has continued to rise due to the vast tracts of water involved, which represent a huge logistical challenge for foreign navies.