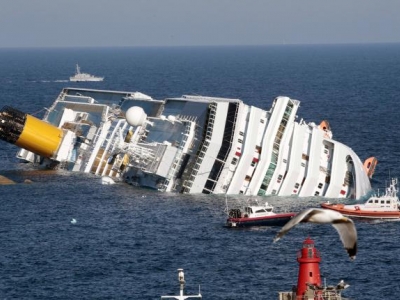 Three people are confirmed dead after a cruise ship carrying more than 4,000 people ran aground off Italy.

There were scenes of panic as the Costa Concordia hit a sandbar on Friday evening near the island of Giglio and listed about 20 degrees.

Most people reached land by lifeboats but some swam to shore.

At least 50 people have not yet been accounted for, Italian officials say, but they caution that the passenger list may not be fully up to date.

Coast guard vessels are combing the waters around the ship, while divers are searching the submerged decks.

The regional prefect’s office said 4,165 out of 4,234 people on board had been accounted for, the Italian news agency Ansa reported.

Italian, German, French and British nationals were among the 3,200 passengers on board. There were also 1,000 crew. 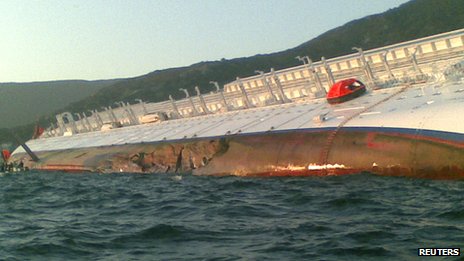 The Costa Concordia was carrying more than 3,200 passengers when it ran aground off the Italian coast Mediterranean cruise

The Costa Concordia had sailed earlier on Friday from Civitavecchia port near Rome for a Mediterranean cruise, due to dock in Marseille after calling at ports in Sicily, Sardinia and Spain.

One thousand passengers were Italian, with 500 Germans and 160 French.

Some “tens” of British passengers are believed to have been on board, said the UK Foreign Office, which is sending a team to the scene.

Some passengers told the Associated Press the crew had failed to give instructions on how to evacuate the ship. An evacuation drill was scheduled for Saturday afternoon.

Investigators will now look into every aspect of this accident, but one of the key elements they will examine will be the electrical systems.

Modern ships tend to use electrical generators to drive the engines, so a power cut can leave the captain unable to steer away from danger.

Human error could also be a factor, and there will also be concern at the speed which the ship listed on to its side. Not only would that have been frightening, it seems to have affected the crew’s ability to launch some of the lifeboats.

All ships have to meet safety standards set out by the International Maritime Organisation. Crews are trained to deal with emergency and cruise companies stress this kind of accident is rare.

Passengers were eating dinner on Friday evening, when they heard a loud bang, and were told that the ship had suffered electrical problems, one passenger told Italy’s Ansa news agency.

“We were having supper when the lights suddenly went out, we heard a boom and a groaning noise, and all the cutlery fell on the floor,” said Luciano Castro.

“We were very scared and freezing because it happened while we were at dinner so everyone was in evening wear. We definitely didn’t have time to get anything else. They gave us blankets but there weren’t enough,” she said.

The 290-metre (950 ft) vessel ran aground, starting taking in water and listing by 20 degrees, the local coast guard said.

Orders were given to abandon ship, Deodato Ordona, a cabin steward on the Costa Concordia, told the BBC.

“We announced a general emergency and took passengers to muster stations,” he said.

“But it is hard to launch the lifeboats, so they moved to the right side of the ship, and they could launch.” 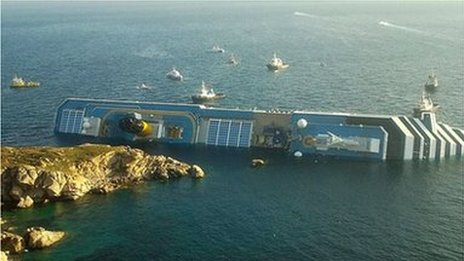 Elderly passengers were crying, said Mr Ordona, adding that he and some others jumped into the sea and swam roughly 400 metres to reach land.

Helicopters evacuated the last 50 people trapped on the ship.

Several passengers compared the accident to the film Titanic, about the sinking of the giant ocean liner in April 1912 which claimed more than 1,500 lives.

“I can easily understand the comparisons to the film, how it must have been on the Titanic, or in a fiction film,” passenger Francesca Sinatra told the Reuters news agency.

“The scenes of panic create disaster. There were people scrambling over each other, elderly people wetting themselves.”

Rescued passengers were accommodated in hotels, schools and a church on Giglio, a resort island 25km (15 miles) off Italy’s western coast.

All those taken to Giglio have now been moved to the mainland, Elizabeth Nanni from the island’s tourist information service told the BBC.

“Usually there are 700 people on the island at this time of year, so receiving 4,000 and some in the middle of the night wasn’t easy,” she said. “Some people jumped in the sea so they had hypothermia.”

“We think this happened as a result of sailing too close to an obstacle like a reef,” he said.

Costa Cruises, the company which owns the ship, said it could not yet say what had caused the accident.

“We’d like to express our deepest gratitude to the coastguard and other emergency services, including the authorities and citizens of the island of Giglio, who did their best in saving and helping the passengers and crew.”

Two years ago, a Costa Cruises ship crashed into a dock at the Egyptian Red Sea resort of Sharm al-Sheikh, killing three members of the crew.