Piracy attack on bulker in Gulf of Guinea thwarted 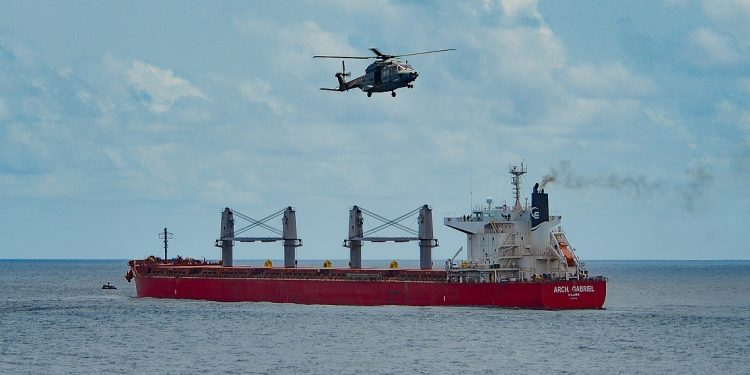 On April 3 the Italian frigate Luigi Rizzo, engaged in the waters of the Gulf of Guinea, received notice of a pirate attack against the merchant Arch Gabriel, and took action to stop the pirates from continuing their activity.

Upon notice, the frigate set sail for the event area and sent one of its helicopters with personnel specialized in safety and boarding activities.

When the helicopter arrived in the area, it acquired radio contact with the crew who reported that they had taken refuge, immediately after having raised the alarm, inside the citadel in order to escape the threat of the pirates on board.

Meanwhile, the frigate had closed the distance with the freighter, verifying the absence of armed aggressors on the open decks as well as of suspicious boats in the surrounding area.

After a few hours, a team boarded the merchant vessel by helicopter while the frigate Rizzo guaranteed the necessary safety support of ship.

After about an hour, the Navy boarding team ensured the safety of the merchant ship, took control of it and, having verified the absence of pirates or other hostile personnel on board, freed the crew.

Recently, Dryad Global indicated that a vessel had been boarded approximately 278nm off South Lome, Togo.

Up until this moment, an investigation is in progress. This incident would represent a break in a significant hiatus of reporting within the Gulf of Guinea.

What is more, last week, Dryad Global published its Annual Report 2021, demonstrating that the global maritime security picture in 2021 was defined by an ever-increasing complex web of threat actors.