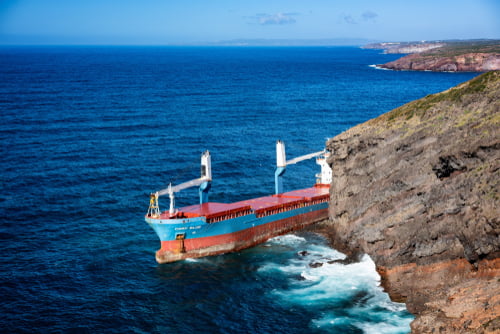 The Public Ministry of the Court of Cagliari concluded the investigations related to the sinking of CDRY Blue vessel, on December 21, 2019 on the island of Sant’Antioco, where it detected serious negligence.

According to investigations carried out by the Special Intervention Unit (INE) of the General Command of the Rome Port Authorities Corps, due to the negligent conduct carried out by the captain and two deck officers of the ship, the navigation was carried out “in contravention of to the rules relating to the safety of navigation and in ways that denoted inexperience, recklessness and seafaring negligence, among other things for maintaining highly dangerous routes in the presence of strong winds that pushed the merchant towards the sea ”, near the coast leeward of the island of Sant’Antioco.

To remind, the 12-person crew was rescued after a complex intervention by Coast Guard helicopters, while the wreck remained on the cliff for a long time.

The ship, empty of cargo, left the Port of Cagliari towards Spain in the presence of particularly adverse weather conditions, despite having technical problems (not communicated to the Maritime Authority) that implied a reduction in the power of the propulsion device, then they proceeded to reverse course to seek refuge.

According to the NIS investigators , “the ship spilled large amounts of hydrocarbons of various kinds into the sea, never recovered despite some interventions by specialized companies, causing an environmental disaster.”

The Public Ministry of Cagliari challenged the investigated crimes related to the safety of navigation, the environmental crimes of disaster and pollution, also calling the owner of the ship and the management company of the ship to respond for the related administrative responsibilities, since the investigations led to determine that the suspects committed crimes in the interest and benefit of these companies.

The vessel, for which a total loss was declared, was owned by the R&S Maritime company of Naples controlled by the shipowner Salvatore Scotto di Santolo.