ISWAN announced that it is launching a new campaign to discourage Indian seafarers from signing up with crewing agencies which have not registered with the Directorate General of Shipping (DGS).

ISWAN’s campaign aims to discourage Indian seafarers from signing up with unregistered crewing agencies by raising awareness of the risks they would face by doing so.

The DGS has issued a circular advising Maritime Training Institutes, RPSL manning agents and other relevant departments and organisations to support the campaign. ISWAN will also run adverts on its social media to promote the campaign.

In a recent survey, conducted by ISWAN, regarding Indian seafarers, over 200 responded. Around 90% knew what an RPSL was and how to find out if an agency had one. However, when asked if they had ever signed up with an unregistered crewing agency in the past, 13% of survey respondents said they had.

Those who had signed with unregistered agencies had experienced problems such as delayed or unpaid salaries, sea time not counted by the MMD, and money lost after paying the agency.

Furthermore, around 20% of respondents did not think that contract issues and sea time not being counted were potential risks. Six respondents stated that they would sign up with an unregistered crewing agency in future, with others saying they would do so if they could not find a job elsewhere.

The full list of registered agencies can be found here.

"Seafarers with unregistered crewing agencies will not be able to appear for higher grade examinations conducted by the Mercantile Marine Department (MMD) of the DGS. All these difficulties affect not only the seafarers themselves but also their families, who can find themselves financially at risk without a reliable income upon which to survive," ISWAN said.

To raise awareness about the issue, ISWAN published a poster, which can be seen in the PDF herebelow 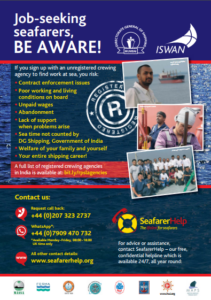