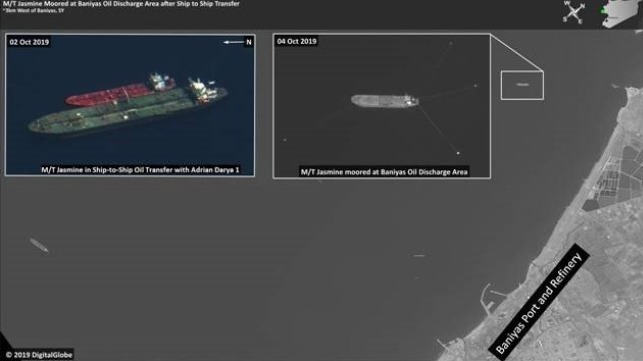 The Iranian tanker Adrian Darya 1, which has been at the center of a diplomatic dispute between Iran and the West over the summer, has offloaded oil in Syria, said US Secretary of State Mike Pompeo on Wednesday, calling on the EU to condemn Iran and hold Tehran accountable.

Oil from the Adrian Darya 1 has been offloaded in Syria, proving that Iran lied to the UK and Gibraltar...EU members should condemn this action, uphold the rule of law, and hold Iran accountable,

The United Kingdom seized the Adrian Darya 1, formerly known as Grace 1, in July off the coast of Gibraltar, on suspicion of being en route to Syria, therefore breaching EU sanctions.

The vessel was eventually released in August, after authorities received formal written assurances from Tehran that the ship would not discharge 2.1 million barrels of oil from Syria.

However in September, Britain’s foreign minister said the tanker had sold its crude oil to the Assad regime in Syria, breaking those assurances.