Credit: NASA / The Earth, an image created from photographs taken by the Suomi NPP satellite.

The Special Report on Global Warming of 1.5°C was created after invitation from the United Nations Framework Convention on Climate Change (UNFCCC) when it adopted the Paris Agreement in 2015 and it was now approved by the IPCC on Saturday in Incheon, Republic of Korea.

With more than 6,000 scientific references, 91 authors and review editors from 40 countries, it will be a key scientific input into the Katowice Climate Change Conference in Poland in December, when governments review the Paris Agreement to tackle climate change.

The ‘Global Warming of 1.5°C’ report focuses on the impacts of global warming of 1.5°C above pre-industrial levels and related global greenhouse gas emission pathways, in the context of strengthening the global response to the threat of climate change, sustainable development, and efforts to eradicate poverty.

One of the key messages that comes out very strongly from this report is that we are already seeing the consequences of 1°C of global warming through more extreme weather, rising sea levels and diminishing Arctic sea ice, among other changes,

The report highlights a number of climate change impacts that could be avoided by limiting global warming to 1.5°C compared to 2°C, or more. For instance, by 2100:

Every extra bit of warming matters, especially since warming of 1.5°C or higher increases the risk associated with long-lasting or irreversible changes, such as the loss of some ecosystems,

An interesting BBC infographic made by Matt McGrath summarizes the five key takeaways of the IPCC report:

The report also examines pathways available to limit warming to 1.5°C, what it would take to achieve them and what the consequences could be.

The good news is that some of the kinds of actions that would be needed to limit global warming to 1.5°C are already underway around the world, but they would need to accelerate,

The report finds that:

This report gives policymakers and practitioners the information they need to make decisions that tackle climate change while considering local context and people’s needs. The next few years are probably the most important in our history,

Tweeting shortly after the report was launched, UN Secretary-General António Guterres said that it is not impossible to limit global warming to 1.5°C, according to the report, ‘but it will require unprecedented and collective climate action in all areas. There is no time to waste‘. 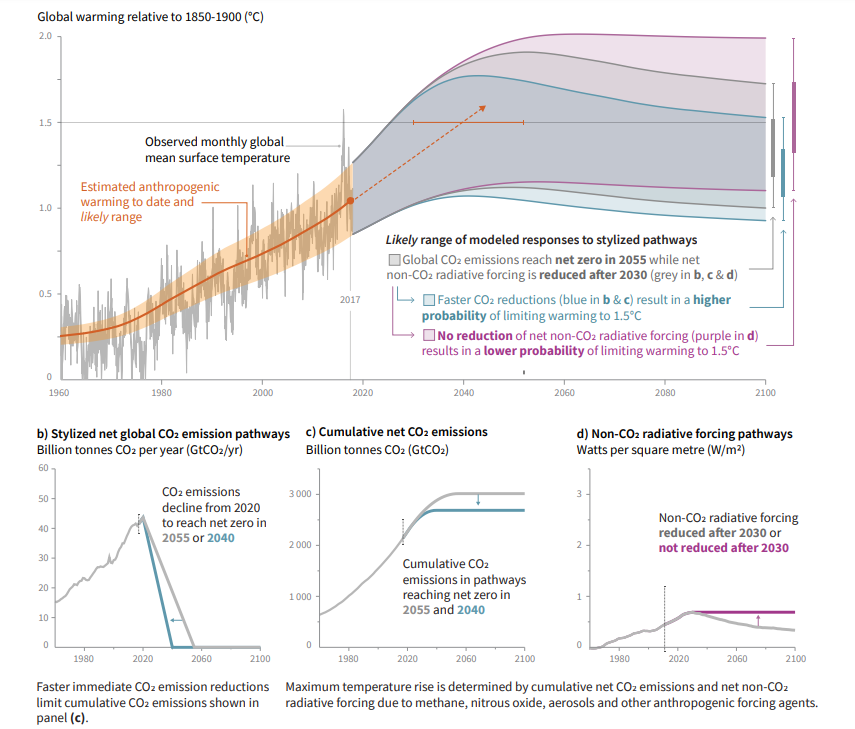 The Paris Agreement adopted by 195 nations at the 21st Conference of the Parties to the UNFCCC in December 2015 included the aim of strengthening the global response to the threat of climate change by “holding the increase in the global average temperature to well below 2°C above pre-industrial levels and pursuing efforts to limit the temperature increase to 1.5°C above pre-industrial levels.”

Global Warming of 1.5°C is the first in a series of Special Reports to be produced in the IPCC’s Sixth Assessment Cycle. Next year the IPCC will release the Special Report on the Ocean and Cryosphere in a Changing Climate, and Climate Change and Land, which looks at how climate change affects land use.