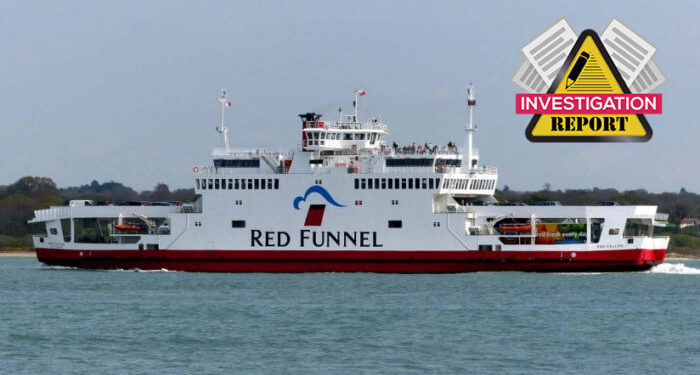 The UK MAIB launched a new investigation report concerning a collision between the ro-ro passenger ferry Red Falcon and the moored yacht Greylag which was sunk on its mooring as a result.

On Sunday, October 21, 2018, the ro-ro passenger ferry Red Falcon had entered the Cowes Harbour having a reduced visibility due to fog and the helmsman experienced difficulty steering due to the lack of visual references and his lack of practice steering by digital compass alone into Cowes Harbour.

In light of the helmsman’s difficulty, the master took control and operated the steering and propulsion himself.

Critically, the role of keeping an oversight of operations was then lost

The reduced visibility impacted the master who relied solely upon his instrumentation. However, his lack of practice using instruments, but most importantly to manoeuvre the vessel, led to in over-correction of steering, which led to the vessel swinging to port out of the channel, ultimately turning through 220º.

The ro-ro then collided with the moored yacht which sank.

It is reported that the collision occurred because the master lost his orientation in the fog and sailed the vessel towards the wrong direction.

He became disorientated because he was sufering from cognitive overload due to high stress, lack of visibility, bridge equipment ergonomics, and the breakdown of support from the bridge team.

Following, the master’s actions and the lack of communication also affected the bridge team who became disengaged, leading to an absence of any challenge to the master’s decisions.

The C/O became confused, mentally rejected the picture displayed by the radar and believed the ECS display instead. In the circumstances, he did not have sufficient time to re-evaluate the ferry’s position, and, therefore, did not challenge the master’s actions. 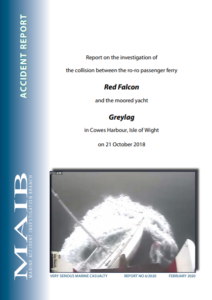