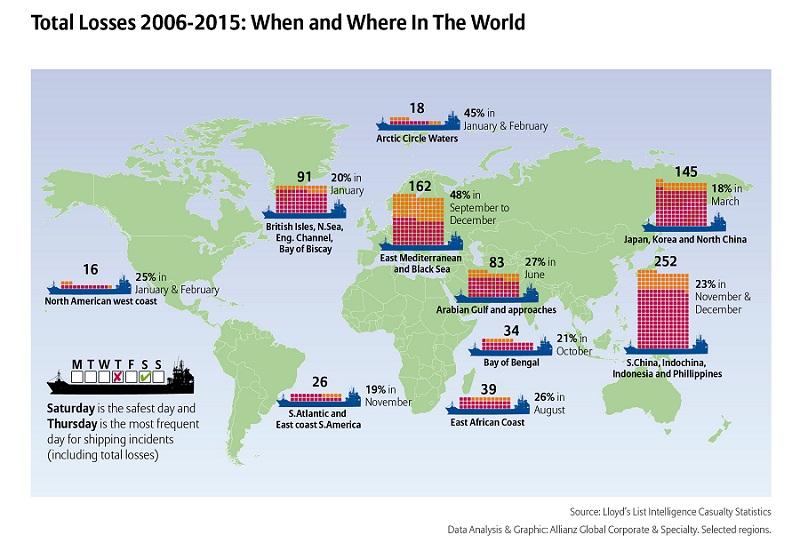 Interview with Capt. Andrew Kinsey on the findings of Allianz’s Annual Review

S4S: In the Annual Summary you highlighted the issue of “Mega Ship” Salvage challenge as a worrying trend and stated that the issue is ‘’ raising safety concerns on what could happen should a more serious incident occur”. In your view what needs to be done to minimize the likelihood of such a future scenario?

A.K. : What we should focus on is the big picture, the overall consequences and uncertainty of the operation of these ships instead of focusing on isolated parameters of the operation. We have to enhance safety by minimizing the uncertainty and improving understanding and knowledge of all relevant operations. As a result we need to focus on proper ship design, providing competent and trained crew with adequate manning of the ships and ensure all operations are planned, executed and supervised properly. We need to focus on training and retention , container weighting and lessons learned from incidents like MOL Comfort , from the operators view and also the class, yard, designer, flag and other stakeholders point of view.

A.K. : In the Northern African area and the Northern Arabian Gulf, we see tremendous improvement and robust effort by world navies to address piracy in the area. Continued vigilance is needed until we start to see political stability in Somalia. Unlike the Gulf of Guinea or the South China Sea, Somalia was operating as a rouge nation, where an entire vessel could be hijacked and held for ransom. Unilateral efforts are still required until this situation is resolved. While we still see piracy incidents, in the Horn of Africa, Somalia, we have a robust and effective co-ordination by the world navies. Unfortunately, we have to continue to be alert until there is a political stability in the government to change the situation.

A.K. : Cyber is not a traditional maritime threat; at sea one can always watch the barometer, look at the weather reports or see the traffic. But we don’t have that type of history and background on the cyber side. I believe that the shipping industry needs to work closely with the IT vendors who have more experience on this so they can begin to track when firewall breaches were attempted. Right now we have so many different vendors calling on a vessel when it comes into port who need to communicate with each other and also to provide from shore updates. Also, we no longer carry a radio operator on board. Therefore, Shipboard Cybersecurity become secondary or tertiary duties to be performed by the crew. Once again, the latter plays an important role however everything starts from Shore side Operations. Shore side Operations has to understand they need to be proactive about it; when they are talking with the crew they should ask them what steps they take, do understand the extent of this threat and provide feedback on their overall performance.

S4S: Regarding cyber security; in the report, you stated that ‘’more needs to be done to educate companies’’. How would you comment on companies’ cyber threat training policy? What would you recommend?

A.K. : Companies need to have the same robust firewalls and security systems even at the most remote offices as at the corporate headquarters. It only takes one instance to get behind the firewall and then have access to the Company's operations, even to the shipboard operating systems in some cases . It is the ‘’Internet of Things’’ as we refer to it. Even the IMO has had two committees engaging in studying this issue. Shipping companies need to understand the overall global aspect of it and that they have to carry out controls across all lines. The actual incident rate of cyber security is under reported; if it is successfully, we don’t even know it happened.

S4S: As you mentioned in the study, there is a growing concern that when it comes to these hard times it is difficult for the ship operators to maintain the same level of maintenance, training and competency of onboard crew. When it comes to the seafarer shortage fatigue and training issues; you stated that ‘’training remains below par in some areas, such as with electronic navigational aids ’’. Where should the industry focus on this issue especially on cyber security in regards to the electricians and the IT persons onboard?

A.K. : I believe, we can all agree that the greatest step any company can take to reduce losses aboard vessels is to improve the crew retention. If you train and keep the crew, then the crew will look after each other. That is crucial. Many operating levels need to be addressed for that. If we need to look at cyber ratings then it should be done. I am a strong opponent of reducing crew. It is always easy to cut manning in the steward department, for instance. Ship operators have to realize that their most valuable asset is the crew which mans the vessel and ultimately protects it. If we don’t give to the crew proper recognition and support, then we are going to face a greater shortage than we already have.

S4S: Regarding Arctic, there was the  anticipation that the Arctic would be the “new Panama Canal” in terms of traffic, while this was never realized, for a number of reasons, the key one being that fuel prices drop consequently making the Arctic NSR not so attractive. However, you mention that there were 71 reported shipping incidents in Arctic Circle and with the mandatory Polar Code, expected to come into force in 2017, we expect that this will improve status in the area. Is the introduction of the Polar Code adequate or should we look forward to supplementary legislation to utterly improve incident statistics?

A.K. : You are exactly right in the fact that we don’t see the growth we had expected due to the reduced bunker prices. On the reverse side, right now, we see containerships travelling from Europe to Asia going round to Africa, with fuel prices under $40/barrel. For the Northern Sea Route, while the Polar Code has not yet started, I believe that the Code has to be addressed and updated more often than other IMO issues. At the very least, IMO should address it annually with an active lessons learned program because - we don’t realize for example - that in the Mediterranean or other high density traffic areas we have been repeatedly calling at the same ports and have been running the same route. And literally talking, in the Northern Sea Route, we are travelling to uncharted waters. The lack of infrastructure and support there, for any event, from a machinery breakdown up to a serious crew injury, in combination with the harsh conditions both the vessel and crew are facing; all these have to be thoroughly analyzed in a case study. Unlike many things we take to the IMO that take years to update, the Polar Code is something whose nature requires close and direct study, editing and feedback that needs to be generated and available so that it can be enforced and improved.

S4S: In your view, what would be the biggest safety challenge up to 2020 for the operators?

A.K. : Crew training and retention, simple and clear. We have to make people proud of being at sea, we have to take care of the crew and we also have to understand that it is a demanding lifestyle and that there are more attractive alternatives out there. Personally, I feel the human element is the key. Also, we have to educate the managers in the offices because they don’t have the sea-going experience or the ability of the Port Captain who has sailed for 30 years and is now sitting at the desk. I feel it is the human element from both the shipboard and shore side operations that will make the difference.

Capt. Kinsey spent 23 years in the US Merchant Marine and US Naval Reserve, sailing in all licensed ranks, including Master. His sailing experience was primarily with Maersk Lines, sailing as Master of three different Container ships. He also served as Master aboard two Military Sealift Command (MSC), Large Medium Speed RORO (LMSR) ships, the USNS “Sisler” and USNS “Red Cloud.” He served in Operations Desert Shield & Desert Storm, Restore Hope, Enduring Freedom and Iraqi Freedom, and received numerous decorations and awards. He recently assumed the position of chairman of the AIMU subcommittee for technical services and is married with two sons.