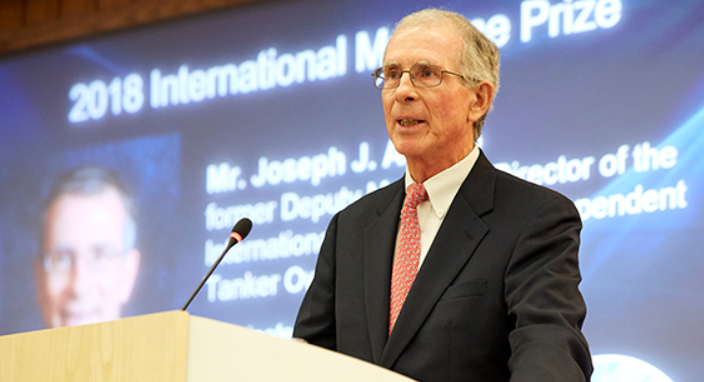 The International Maritime Prize for 2018 has been presented to Mr. Joseph J. Angelo, a former USCG and INTERTANKO senior executive who participated in IMO meetings for many years, providing leadership on a number of key regulatory developments.

IMO Secretary-General Kitack Lim presented the prize on Monday, 25 November, on the occasion of the annual IMO Awards ceremony.

The IMO Council decided in July to award the Prize to Mr. Angelo in recognition of his contribution to the work and objectives of IMO and to the international maritime community as a whole.

Mr. Angelo was nominated by the Government of the United States and INTERTANKO.

Mr. Angelo was active in a number of IMO bodies, most notably the Maritime Safety Committee (MSC) and the Marine Environment Protection Committee (MEPC).

He graduated from the United States Merchant Marine Academy at Kings Point in 1971. After a short stint in the US Navy, he joined the US Coast Guard as a civilian in 1977, rising to become a member of the Senior Executive Service in 1992.

He retired from the USCG in 2005 and joined INTERTANKO to manage their Americas operation, becoming Acting and later Deputy Managing Director, while being responsible for INTERTANKO's engagement at IMO.

As a US delegate, Mr. Angelo also provided leadership on other important issues, including the adoption of the mandatory reporting system to protect the endangered North Atlantic right whale; the Approved Continuous Examination Programme (ACEP) for containers under the International Convention for Safe Containers; the specifications for the design, operation and control of crude oil washing systems; and the Code of good practice and key elements of Y2K contingency plans for ships.

The International Maritime Prize is awarded annually by IMO to the individual or organization judged to have made the most significant contribution to the work and objectives of the Organization.

The prize consists of a sculpture in the form of a dolphin and includes a financial award, upon submission of an academic paper written on a subject relevant to IMO.

During the Awards ceremony, IMO Secretary-General Lim also presented a special certificate for individuals/organizations who have contributed greatly to the work of the Organization.

The special certificate was awarded to Admiral Mohab Mohamed Hussein Mameesh, former Chair and Managing Director of the Suez Canal Authority and Chair of the General Authority for the Suez Canal Economic Zone. Admiral Mameesh was nominated by Egypt.