Infographic: The fuels of the future

IMO has developed an ambitious target to achieve a minimum of 50% reduction in greenhouse gas (GHG) emissions by 2050. However, to keep in line with this target, shipping industry must trust alternative fuels, that will lead it into the decarbonized future.

Today, according to Bureau Veritas, shipowners have alternative fuel options to help them meet IMO’s ambitions, each with its own advantages and challenges.

One of these fuels is LNG. As Dr. John Kokarakis, Vice President Technology & Business Development –Bureau Veritas, says, LNG “and its cousin LPG” are very hopeful candidates. LNG is utilized in high and low pressure dual fuel engines, but there is a stumbling block with its availability. However, some of the problems can be removed with LPG which is easier to store and also it has higher availability.

Another option is methanol, which complies with 2020, and has relatively low CO2 emissions. On the other hand, it is costlier than LNG and LPG, corrosive and has low energy density.

Biofuels are also able to satisfy the 2020 requirements, but they do compete with the food-chain. According to Mr. Kokarakis:

We would need two times the UK in expands, in order to get what we need in bio-fuels

One of them, biodiesel, is a very safe fuel, but it has its problems, such as its price comparable to diesel, while it also degrades.

A number of studies nominate ammonia and hydrogen as the “queen and king of the future fuels.” A big advantage of ammonia is that it is easier to store than LNG. Nevertheless, it is toxic and could cause stress corrosion in steels and needs fuel for ignition.

Hydrogen is probably one of the most abundant elements in nature, but there could be issues with the life-cycle of its production. It is  considered a sustainable fuel, but it is flammable and has low energy density.

You can see more information in the following infographic. 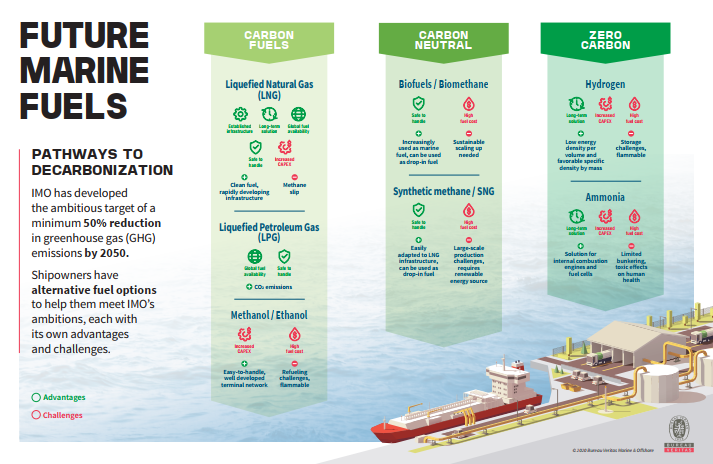