SonicWall, a cyber security company, launched an infographic based on its 2020 report, concerning the cyber threats that heavily targeted Internet of Thing (IoT) devices in 2019.

IoT technology generally refers to 'smart devices'. These are equipped with electronics, software, sensors and network connectivity, in order to be able to be connected to the internet. 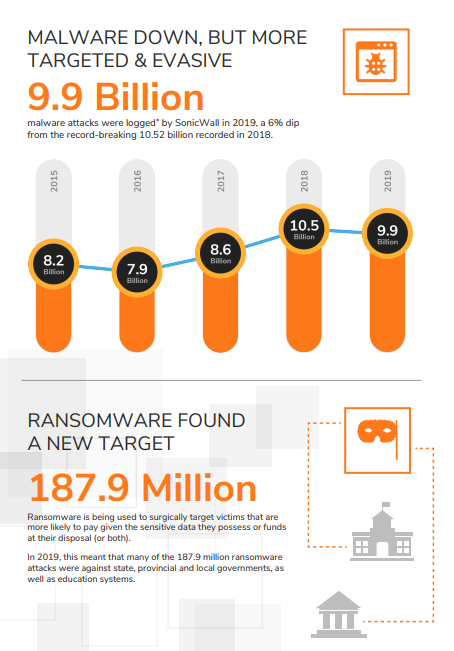 According to the infographic above:

In 2019, SonicWall discovered a 5% increase in IoT malware, with total volume reaching 34.3 million attacks. But with a deluge of new IoT devices connecting each day, increases in IoT malware attacks should not only be expected, but planned for.

Now, ransomware is being used to surgically target victims that are more likely to pay given the sensitive data they possess or funds at their disposal (or both).

In 2019, this meant that many of the 187.9 million ransomware attacks were against state, provincial and local governments, as well as education systems.

The price of bitcoin and complementary cryptocurrencies created an untenable situation between Coinhive-based cryptojacking malware and the legitimate Coinhive mining service.

After the shuttering of Coinhive, the volume of cryptojacking hits dropped 78% during the second half of 2019.

Fileless malware exists exclusively as a memory-based artifact and does not write any part of its malicious activity to the computer's hard drive, making it very resistant to forensic strategies. Volume peaked in the third quarter, with more than 570,000 attacks recorded by SonicWall in September 2019 alone.

Savvy cybercriminals continue to use TLS/SSL encryption to mask their attacks from inspection by traditional security controls. In 2019, SonicWall Capture Labs threat researchers recorded a 27.3% year-over-year increase of malware sent over TLS/SSL traffic.