Infographic: Impacts of delaying the ban of HFO use in Arctic

On the sidelines of the International Maritime Organization's (IMO) Arctic Summit, HFO-Free Arctic, global campaign by the Clean Arctic Alliance 2020, published an inforgraphic informing of the severe impacts of HFO use in the Arctic, also highlighting the economic impacts of clean-up costs and an HFO ban.

Now, on the sidelines of IMO's Pollution Prevention and Response (PPR) 7 environmental groups ask the IMO to protect the Arctic marine environment from the impacts of international shipping. 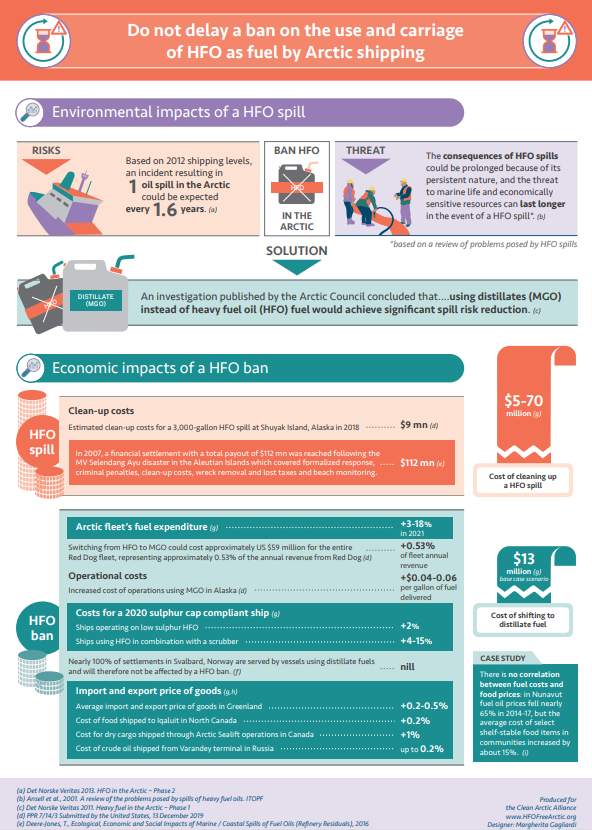 The campaign aims to raise awareness and further inform the public on the current situation in the Arctic and shipping's impact on the Arctic environment, while at the same time the campaign urges the International Marine Organization (IMO) to implement a regulation to ban the use and carriage of heavy fuel oil (HFO) as fuel by ships operating in Arctic waters.

Therefore, the infographic above expresses the risks arising from HFO use in the Arctic, as based on 2012 shipping levels, an incident resulting in one oil spill in the Arctic could be expected every 1.6 years.

As a result, the consequences of HFO spills could be prolonged due to its persistent nature, while the threat to marine life and economically sensitive resources can last longer in the event of a HFO spill.

Concerning the economic impacts of a HFO ban, it is reported that the clean up costs for a 3,000 gallon HFO spill at Shuyak Island, Alaska in 2018 was estimated to be around $9 million.

In 2007, a financial settlement with a total payout of $112 million was reached following the MV Selendang Ayu disaster in the Aleutian Islands which covered formalized response, criminal penalties, clean-up costs, wreck removal and lost taxes and beach monitoring.

The Alliance adds that about 100% of settlements in Svalbard, Norway are served by vessels using distillate fuels and will therefore not be affected by a HFO ban.

Concluding, an HFO spill would impact Alaskan fisheries for a period of time that is undeterminable and could take years to recover. Subsistence is linked to the health of communities through nutrition and through traditional cultural practices.