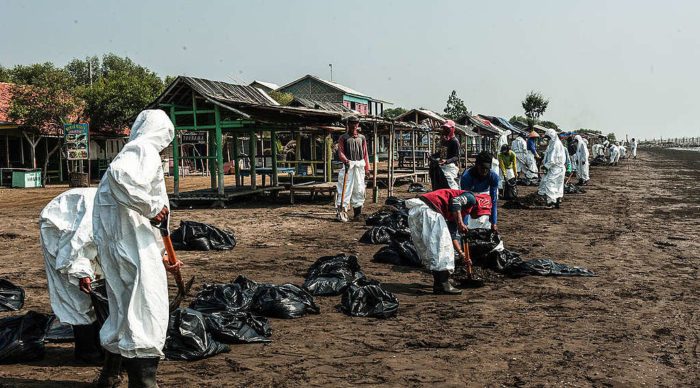 Greenpeace Indonesia accuses Pentamina, state-owned oil major, that an oil spill from an oil well off West Java has polluted miles of beachfront and has disrupted traditional fisheries and calls the oil company to provide more information about the oil spill response and the safety measures taken on the nearby offshore facilities.

An oil spill may take weeks, months or even years to clean up. With this respect, SAFETY4SEA suggests that an effective oil spill response requires an efficient understanding of roles and responsibilities of each interested party.

For the time being, the quantity of oil spilled in the area remains unknown; Yet, Vice informs that the flow rate is in the range of 400-600 bpd. Also, Vice reports that the oil spill has reached shore near Karawang.

Following the oil spill, Pentamina reported in late July that the efforts to plug the leak may take approximately eight weeks, before being able to fully shut down the leak. In sight of the oil spill, the company employed 32 vessels to handle the oil spill and firefighting among other measures.

Moreover, in early September, the company announced that they would compensate those that suffered and were impacted from the oil spill. Specifically, the Indian Financial times, added that Pertamina has reportedly collected Rp 18.54 billion for its compensation for 1,245 residents in two villages in Karawang waters, West Java.

Concluding, the Indonesian Coalition for Civil Society Organizations (KORMAS) called Pentamina for immediate disclosure of all data on the YYA-1 well and to provide information about the condition of other wells in the mature Offshore North West Java (ONWJ) exploration area.

In essence of the severity of an oil spill and the damage it may cause to the environment, SAFETY4SEA provides an insight into oil spill response in its 'Emergency Procedures' column. In the meantime,