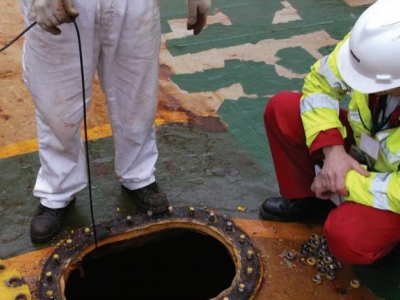 Indian Ocean MoU issued the preliminary results of the Concentrated Inspection Campaign (CIC) on Crew Familiarization for Enclosed Space Entry which carried out between 1st September 2015 and 30th November 2015. This campaign was conducted in conjunction with the CIC carried out by the Tokyo MoU and the Paris MoU.

During the course of the campaign member Authorities of the IOMOU carried out inspections of 1,454 individual ships with 83 detentions out of which 1,137 inspections of individual ships covering 58 flags were undertaken using the CIC questionnaire, and total of 8 ships were detained for the CIC related deficiencies, resulting a CIC topic related detention rate of 0.70%.

Type of ships detained for CIC-related deficiencies; 4 (50%) were Bulk Carrier, 2 (25%) were General cargo/multi-purpose ship and 1 each (12.5%) of Heavy Load Carriers and Offshore service vessel.

The most significant deficiencies found during the campaign were related to questionnaire 2, 4, 5, 7 and 9, are as follows:

The results of the campaign will be further analyzed, including additional information gathered, and findings will be presented to the 19th meeting of the Port State Control Committee in September 2016, after which the report will be submitted to the International Maritime Organization.