The Indian Ministry of Shipping announced that a container cargo consignment voyaged on inland waterways from Haldia Dock Complex (HDC) to the Inland Waterways Authority of India (IWAI) terminal at Pandu in Guwahati on 4 November 2019, making it the first ever containerised cargo movement on this Inland Water Transport (IWT) route.

The voyage will last about 12 to 15 days, with the vessel sailing via National Waterway-1 (river Ganga), NW-97 (Sunderbans), Indo-Bangladesh Protocol (IBP) route and NW-2 (river Brahmaputra).

The 1425 km long movement is expected to establish the technical and commercial viability of IWT mode using these multiple waterways even as a series of pilot movements are planned on the stretch. The latest IWT movement is aimed at providing a fillip to North East Region's industrial development by opening an alternate route for transportation of raw material and finished goods.

Moreover, the Protocol on Inland Water Transit and Trade (PIWTT) between India and Bangladesh allows mutually beneficial arrangements for the use of their waterways for movement of goods between the two countries by vessels of both countries. 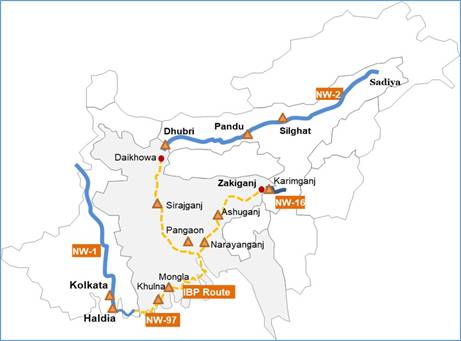 Improving their relations, India and Bangladesh have taken major steps to enhance utilization of waterways in the recent past. These include agreement on declaration of additional Ports of Call under PIWT&T at Kolaghat, Dhulian, Maia, Sonamura in India, and Chilmari, Rajshahi, Sultanganj, Daukhandi in Bangladesh.