The Government of India published  the Sea Cargo Manifest & Transhipment Regulations 2018 (Regulations framed under the Customs Act, 1962) following a number of extensions and amendments, which came into force on August 1, 2019.

Specifically, the amended regulations replace regulations dealing with the timing and procedures for the delivery and filing of arrival and departure manifests and seek to streamline these processes for vessels carrying imported goods into India, vessels carrying export goods out of India as well as for vessels engaged in coastal carriage. The Regulations also introduce some new forms which the carrier is obliged to complete.

Accordingly, the regulations focus on:

#1 The Arrival Manifest: an integrated declaration required to be delivered by an authorised carrier before or on arrival of

#2 The departure manifest: an integrated declaration required to be delivered by an authorised carrier before departure of:

#3 An authorised sea carrier importing or exporting goods may deliver the arrival manifest to the specific officer electronically, provided that:

#5 Transhipment of imported goods or export goods: An authorised carrier shall file a departure manifest before the departure of a train or a truck and arrival manifest upon arrival of the train or truck.

#6 Amendment of arrival or departure Manifest or Condonation of delay:

Under the condition that an authorised person by the Commissioner approves that: 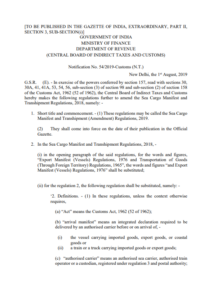