Independent check of installation could have prevented explosion in CSV

The Accident Investigation Board of Norway (AIBN) released its report on the work accident on board the Normand Maximus off the coast of Brazil on 21 February 2017. Because of the incident one died, while another one got seriously injured and three persons sustained minor injuries.

The construction service vessel (CSV) Normand Maximus was hired by Saipem to function as a platform at sea. In cooperation with Baker Hughes, Saipem was to conduct pre-commissioning tests to verify that all equipment and components are in accordance with the requirements stipulated for the Petrobras on the oil field Lula.

Baker Hughes was performing pressure testing of the oilfield’s gas flow system when the accident happened. The pressure testing operation occured in a cordoned off area on the CSV Normand Maximus’s open aft deck. A permit to work (PTW) system was used to identify hazards and ensure that safety measures were implemented.

On Tuesday 21 February 2017, along with recovery/depressurisation of the MEG1 system, at a pressure of 215 bar, the compressed mixture of air and MEG exploded, which caused numerous blowouts and breaks in the system of pipes and valves on the open deck. A Baker Hughes employee who was working in front of a manual pipe valve was hit by the valve’s handwheel, thrown out by the explosion and died. Moreover, one seriously injured person and three persons with minor injuries were on the deck.

According to AIBN, no independent party checked or approved whether the functionality of the installation was appropriate for use on board the vessel after the equipment had been installed on deck and was ready for use on the oil field.

The report notes that an independent check and approval by an external party would have contributed to the shipping company/vessel to be more confident in the performance of their duties as the party responsible for safety on board the vessel.

AIBN recommended Norwegian Maritime Authority to conduct an assessment of whether the current regulatory framework is able to ensure safety on board offshore vessels engaged in complex national and international operations for the petroleum industry.

See more in the PDF below 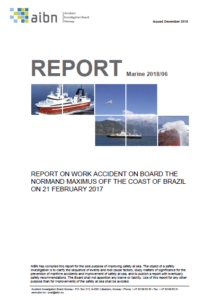