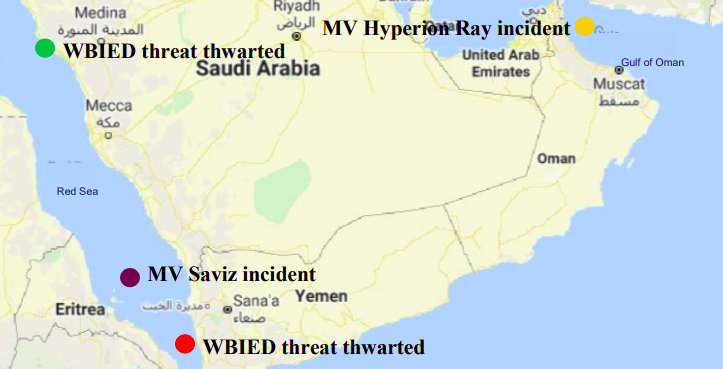 In the May edition of ‘The SENTINEL Watch’, the International Maritime Security Construct provides the merchant shipping industry with an update on maritime security incidents within the Middle East Region.

Separately, on April 7, Iran reported the MV Saviz sustained an explosion and suffered light damage. The MV Saviz is believed to be a base for the paramilitary Revolutionary Guard and has been anchored for years in the Red Sea off Yemen. Iran described MV Saviz as aiding in “anti-piracy” in the Red Sea and the Bab el-Mandeb strait.

The threat for IMSC flagged vessels remains unchanged in the Southern Red Sea and Bab el-Mandeb strait at LOW-MODERATE, with the higher threat level being focused around Yemen and Saudi Arabia Red Sea ports.

On April 14, multiple news outlets reported that Israeli-owned and Bahamas-flagged vehicles carrier MV Hyperion Ray was attacked off of Fujairah. Shipowners reported the ship did not sustain damage and continued at full speed on its original voyage. This incident was reported by MSCHOA’s Industry Releasable Threat Bulletin (IRTB) Issued: 15APR21 026 and UKMTO ADVISORY NOTICE 003 APR-2021.

ReCAAP ISC: No piracy incident against ship in Asia the last week

Meanwhile, the threat within the Arabian Gulf and Gulf of Oman remains LOW-MODERATE for IMSC flagged vessels, with the higher level being focused around the Strait of Hormuz and Western Traffic Separation Scheme north of Abu Musa and Siri Island.

CTF SENTINEL does not recommend use of the Western Traffic Separation Scheme for transits to the central Arabian Gulf.

Masters are encouraged to report incidents to CTF SENTINEL via UKMTO…Mariners are advised to follow guidance in BMP 5 (as modified by national authorities) and review the guidance and responses contained within the IMSC Bridge Cards.

In addition to the guidance provided in BMP5, merchant shipping is encouraged to report the following to
UKMTO as detailed in the IMSC Bridge Cards: