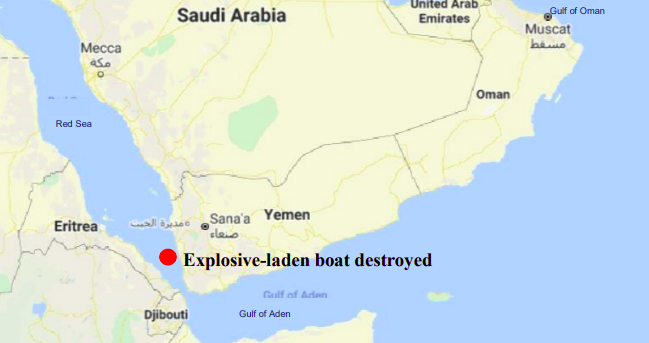 In the April edition of ‘The SENTINEL Watch’, the International Maritime Security Construct provides the merchant shipping industry with an update on maritime security incidents within the Middle East Region. Of concern was the destruction of an explosive-laden boat by Arab coalition off Yemen.

On March 16, 2021, Reuters reported the Arab coalition had destroyed an explosive-laden boat, possibly preventing an attack off the port of As-Salif, Yemen.

The threat within the Southern Red Sea and Bab-el-Mandeb Strait (BAM) remains unchanged for IMSC flagged vessels at LOW-MODERATE.

Houthi misidentification and criminal conduct continue to present a threat for merchant shipping in the region, especially in vicinity of the Yemen coast or in Yemen ports. While there were no incidents in the Arabian Gulf or the Gulf of Oman last month, the threat remains LOW-MODERATE for IMSC flagged vessels based on recent malign activity in the region and continuing geo-political tension.

Meanwhile, a US MARAD alert of March 25, 2021, 2021-004A, reported a small explosion in the Arabian Sea, but the incident is highly unlikely as a maritime security (MARSEC) event, according to IMSC.

Additionally, reports of GPS interference persist and mariners are encouraged to report any such activity in real-time noting critical information, such as location, date, time, duration of outage, and photographs of equipment failure.

Warships and aircraft continue to provide overwatch to merchant vessels throughout the IMSC area of operation. Vessels transiting the area can expect to hear IMSC conducting Maritime Awareness Calls (MAC) on a regular basis. Masters are encouraged to report incidents to IMSC via UKMTO.

Furthermore, Ship Owners, Operators, and Masters are advised to follow guidance in accordance with BMP 5 and national authorities and review the guidance and responses contained within the IMSC Bridge Cards. BMP 5 Ship Protection Measures are highly encouraged: