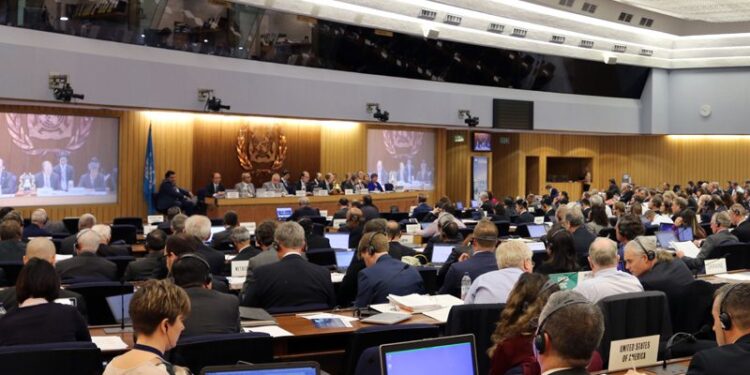 The IMO Sub-Committee on Pollution Prevention and Response held its 4th session (PPR 4) from 16 through 20 January 2017 under the Chairmanship of Mr Sveinung Oftedal (NORWAY) and his Vice Chair, Dr Flavio Fernandes (BRAZIL); both were re-elected for 2018.  Three Working Groups (WG) and two Drafting Groups (DG) were formed and chaired as follows:

Items of particular interest are as follows:

The Sub-Committee approved the report of ESPH 22 held from 10 to 14 October 2016, circulated as document PPR 4/3.  An ESPH Working Group (WG1) was then established and the subsequent report approved in general.  In particular, the Sub-Committee:

The Sub-Committee established a Working Group (WG2) with instructions to prepare final text of the OSV Chemical Code and a draft requisite Assembly resolution for its adoption.  This was duly done for approval by MSC98 and MEPC 71, with a view to adoption at Assembly 30 (week commencing 27 November 2017).  WG2’s view that the OSV Chemical Code should be made mandatory in the future was noted.

The BWM Convention enters into force on 8 September 2017.  The number of Contracting Governments is currently 54, representing 55.3% of world tonnage.  Following discussion in Plenary, DG1 was established and after 3 days hard work, submitted a report to the Sub-Committee which it approved in general, and in particular:

With regard to the discussion in Plenary on the Guidelines for sampling of ballast water (G2), it was recognised that further work related to guidance on sampling and analysis is necessary, thus it was agreed to invite MPEC 71 to extend the target completion date for this output to 2019.

WG3 was tasked to finalise the reporting protocol for voluntary measurement studies to collect data, focussing on using the definition of Black Carbon to support data collection and in addition, to develop a timeline for finalising consideration of the impact on the Arctic of emissions of Black Carbon from international shipping.  The Sub-Committee approved the relevant parts of WG3’s report in general and in particular:

The Sub-Committee agreed to WG3’s recommendation that, with further development of the draft Standards for shipboard gasification of waste systems and associated amendments to regulation 16 of MARPOL Annex VI and IAPP Certificate in mind, to establish a Correspondence Group.
Guidelines for the discharge of exhaust gas recirculation bleed-off water

The Sub-Committee having considered the report of the Correspondence Group set up by PPR 3 noted that it had developed draft Guidelines and identified three outstanding issues needing resolution, viz:

The Sub-Committee decided that Annex VI is more appropriate than Annex I, but having noted that MARPOL Annex VI is not referenced in the Polar Code, agreed that if more stringent discharge criteria are needed, this should be addressed in the guidelines under development.  As to survey and certification provisions within the Guidelines, the WG submitted that the bleed-off discharge system and the EGR record book should be subject to survey on installation and at initial, annual / intermediate and renewal surveys by the Administration.

The bleed-off discharge system and the EGR record book may also be subject to inspection by port State control.  The Sub-Committee agreed a set of draft Guidelines for the discharge of exhaust gas recirculation (EGR) bleed-off water with a view to submission at MEPC 71 for adoption.

The Sub-Committee recalled that the Drafting Group on OPRC related manuals, guidelines and guidance established at PPR 3 had not completed a review of all the course materials provided and had requested the Secretariat to prepare and submit a final draft of the Model Courses to PPR 4 for consideration.  The finalised draft materials of the four courses that comprise the OPRC Model Training Courses, namely the introductory level, tactical level, operational level and strategic level, duly submitted by the Secretariat, were sent to DG2 for scrutiny.  Following several days’ work by DG2, their report included final drafts of all four courses, suitably amended and which were endorsed by the Sub-Committee for submission to MEPC 71, with a view to approval and subsequent publication.

Use of electronic record books

In general, there was support for the use of electronic record books and the need to expedite finalisation of the draft guidance and associated MARPOL amendments to ensure uniform implementation, given the fact that a number of Member States have encouraged such practice and are already using electronic record books.  However, it was felt that substantial further work is needed to address any potential technical, legal and procedural issues in order to ensure that the same level of safety, security, protection or availability is as watertight as those of the written records required in MARPOL.

It was agreed that electronic record books should be presented in the form as specified in relevant MARPOL Annexes in order to assist the smooth transition from hard copy record books to electronic ones while not ruling out the need to further explore the extent of flexibility of the forms in the future.  As to the feasibility of using other electronic documentation, it was agreed that in order not to further delay the finalisation of the draft guidance, it should not cover electronic documentation which requires different verification processes and that this matter may be revisited in the future, based on the experience gained with the use of electronic record books.

With a view to expediting the work, the Secretariat will prepare draft amendments to MARPOL to effect electronic record books, together with an updated version of the draft guidance for their use under MARPOL, associated draft unified interpretations of MARPOL, and draft amendments to the Procedures for Port State Control, 2011 (resolution A.1052(27)), for consideration at PPR 5.

Revision of the 2011 SCR Guidelines

The Sub-Committee agreed that unnecessary complications in the application of the 2011 SCR (Selective Catalytic Reduction) Guidelines need to be removed, in part to enable the use of new technologies.  Thus consideration needs to be given as to whether Scheme A and Scheme B (both are test procedures, A being straightforward and B more complex) are equivalent under the NOx Technical Code, and, if necessary, a justification for the relevant amendment to the Code should be prepared.  Of note, the need for on-board confirmation testing under Scheme A was not supported.

Following discussion in Plenary, the Sub-Committee instructed WG3 to consider the need for any amendments to the NOx Technical Code 2008 in the context of using Scheme A or Scheme B and to prepare a revision of the 2011 SCR Guidelines.

In WG3’s subsequent report, the Sub-Committee:

The fifth session of the PPR Sub-Committee has tentatively been scheduled to take place from 5 to 9 February 2018.