​The agreements will see US$509,000 in funding going to three environmental initiatives 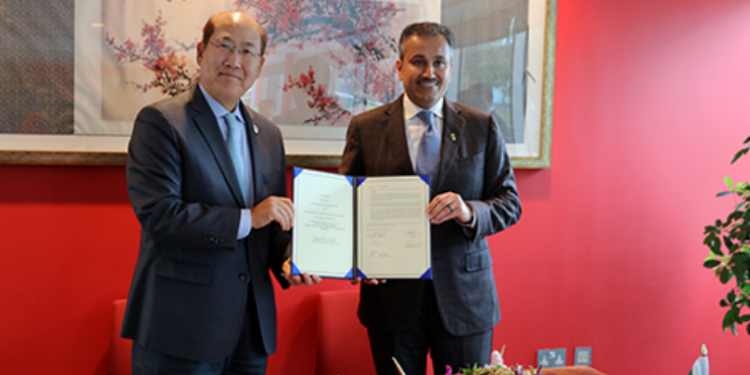 New funds will support projects to tackle biofouling and marine plastic litter and the designing of long-term programme to help cut ship emissions.

IMO has signed three partnership agreements with the Kingdom of Saudi Arabia to support the preparation of a new global project that targets ship-based emissions.

“IMO is committed to a global approach to environmental protection, with capacity building in developing countries to ensure that no Member State is left behind on this important journey. Lowering emissions, reducing marine litter and tackling invasive aquatic species are vital to preserving our oceans. I am very pleased that these agreements will go towards IMO projects to help reduce the impact of shipping on our oceans. They demonstrate our continued commitment to protecting our environment,” said Secretary-General Lim.

“We know that it is technological innovation and the development of alternative future fuels that will be key to progress. But it’s equally important that we ensure that innovations in these areas are inclusive and coordinated as well. No one can do this alone and no one should be left behind. We need both the North and the South to get connected in this innovation ecosystem and we need all stakeholders to be around the innovation table including stakeholders across the value chain,” said His Excellency Mr. Saleh bin Nasser al-Jasser.

Under the first agreement, around US$400,000 will be used to fund a 12-month preparatory phase of a new long-term IMO CARES (Coordinated Actions to Reduce Emissions from Shipping) initiative. The Project aims to accelerate demonstration of green technologies and their deployment globally in a manner that facilitates blue economic growth in developing regions. The preparatory Project will lead to the design of IMO CARES Programme and will be executed by IMO’s Department of Partnerships and Projects (DPP).

“IMO is committed to long-term technology cooperation and capacity building programmes focussed on needs of developing countries that will support the IMO Initial GHG strategy, the IMO resolution on technology transfer and capacity building as well as the resolution on cooperation between ports and shipping to reduce GHG emissions,” said Mr. Jose Matheickal, DPP Chief. He said that the IMO CARES Project will build on and complement other ongoing work by IMO and connects this work to various R&D and innovation initiatives around the world.

The foundation Project will undertake regional and global consultation workshops to design the key elements and framework of the global programme. It will maintain a focus on developing countries in order to facilitate a global decarbonization shift.

Raising awareness of biofouling for women in Arab States

The second agreement sets out US$54,500 in funding for IMO’s ongoing GloFouling initiative, a GEF-UNDP-IMO GloFouling Project to drive actions to implement the IMO Guidelines for the control and management of ships’ biofouling. The funding will go towards holding an awareness-raising workshop on ships’ biofouling for women in Arab States. Ships’ biofouling is one of the main sources for introductions of invasive aquatic species and is one of the main threats to marine biodiversity. The environmental impacts are often associated with substantial economic costs. Biofouling also results in increased fuel consumption and contributes to GHG emissions from ships.

The workshop will seek to improve awareness and expertise on general aspects of biofouling management to increase participation of women across maritime industries and administrations. Additionally, the workshop will create new opportunities and encourage entrepreneurship, with a specific focus on initiatives sponsored or created by women.  It is expected to create an empowering space for reducing existing gender disparities in maritime administrations, the scientific community and the private sector.

The event will gather women in maritime administrations, female business entrepreneurs, researchers and representatives from private sector companies, industry associations and the IMO-supported Women in Maritime associations for a review of the issue of biofouling, and a cross-sectoral analysis of solutions and services that will be required in relation to biofouling prevention and management.

The IMO-Norway-Food and Agriculture Organization (FAO) GloLitter Project to tackle marine plastic litter will receive co-financing of US$54,5000 under the third agreement with Saudi Arabia.

Reducing and preventing marine plastic litter, which can include discarded items from ships and discarded fishing gear, is vital to safeguard coastal and global marine resources. The GloLitter Project encourages twinning between countries to create a network for facilitation of knowledge dissemination about best practices to tackle marine plastic litter. The additional funding will be used to strengthen this model.

Under the agreement, the additional funding from Kingdom of Saudi Arabia will augment the ongoing GloLitter Project by focusing on some of the Lead Partnering Countries (LPC) and twin those with one or more Partnering Country (PC) within the GloLitter network. IMO will prepare a guidance document for twining purposes and then the twinning countries can apply to be nominated as twins together with their specific work plan and related funding support needed. Funding support will include aspects such as organising workshops, providing expertise, etc.