IMO: Need for more studies on coatings as new source of microplastics

IMO issued a report to assess current knowledge and data regarding marine coatings as microplastics sources, identifying very little practical research or knowledge on the topic. The IMO review came after a recent report by the International Union for the Conservation of Nature (IUCN) which showed that hull scrapings, marine coatings and anti-fouling systems are potential sources of microplastics in the oceans.

The global annual production of plastics has increased, and the plastics waste stream exceeds production; up to 95% of marine waste is comprised of plastics. Whilst plastics suffer limited microbial degradation, over time they are known to break down to monomers with potential toxic effects. They can also be taken up by planktivorous and particulate filter feeding species where they may affect biophysical processes (e.g. respiration, growth, etc.).

Microplastics (generally agreed to be of a size less than 5 mm) have also been shown to sorb contaminants such as heavy metals and organic pollutants, with some organism guts having higher contaminant levels than the surrounding sediment.

Microplastic sources include the breakdown of larger terrestrially-based material through light, wave action, general abrasion, and through waste water discharge with material such as microfibres from clothing. Shipping is identified as a source of plastics, though limited data are readily apparent and there is little mention of marine coatings as a source of microplastics. It is known that anti-fouling systems and marine coatings in general commonly contain a relatively high content of a polymer material (e.g. epoxy or acrylic).

Nonetheless, while the release of biocides and heavy metals from marine anti-fouling systems and, to a lesser extent, other coatings has been considered, the issue of plastics has seen limited attention. Some research has identified microplastics from marine paints in sediment, and other work identified that shipyard maintenance may transport microplastics by air or runoff but in-water hull cleaning was not considered. Further, work shows that general operation emits copper and biocides from vinyl and epoxy coatings, which increases significantly during cleaning maintenance.

However, the research reviewed did not consider microplastics release. Limited work does begin to recognize marine coatings as a source of possible microplastics, particularly self-polishing anti-fouling products, which are designed to slough off during a ship’s normal operations.

Whether abrasive hull cleaning also causes loss of microplastics is not known, but it is possible, because hull coatings are often designed to slough off, and further research is needed.

The study identified important data gaps and made suggestions for subsequent research into whether ship coatings are an important source of microplastics to the ocean. If so, the overall relative contribution to ocean microplastics from ship coatings, as well as the individual contributions from the normal use, maintenance and cleaning of coatings, need to be determined as the first step in further research efforts with a view towards informed management.

Additionally, the hull cleaning industry is growing in some geographic areas; therefore studies are needed to determine whether sensitive ecosystems and food webs may be affected by resultant micro-plastic material, the report adds.

It appears likely that appropriate research or further detailed contact with researchers in the field may be needed to at least assess the likelihood of microplastics release from marine paints, in particular anti-fouling systems. If the release of microplastics is established, further research questions regarding pathways and possible toxicity will be necessary, which would then inform the need for management and regulatory interventions at the national and international levels, 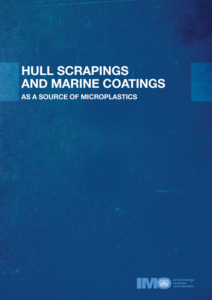