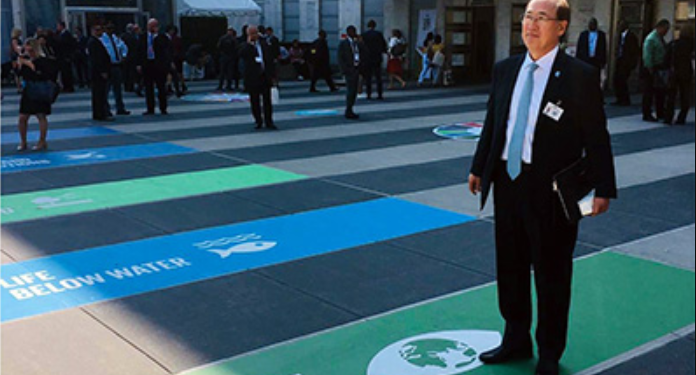 The UN Climate Action Summit which took place in New York City on the September 23, enabled worldwide leaders to present their proposals and solutions for the ongoing battle against climate change, whereas IMO’s Sec-Gen focused on the progress made in tackling climate change.

In fact, Kitack Lim, the IMO Secretary-General discussed the development that has been accomplished by the industry in attempts to reduce GHG emissions from worldwide shipping, aligning to the 2030 Agenda for Sustainable Development and the SDG 13 on Climate change in particular.

In his opening speech, Kitack Lim addressed the topic of decarbonizing the industry. He also delivered a presentation at the opening of the Sustainable Ocean Principles. Through the Global Compact, businesses can find more sustainable and feasible ways to endorse values that go beyond merely generating profits for investors.

The IMO Sec-Gen also highlighted IMO’s initial greenhouse gas strategy which has been in place since 2018 and expects that total GHG emissions to be reduced at least by 50% by 2050 as compared to 2008 levels and even getting rid of them at the earliest; Meaning that vessels currently sailing in seas, have to reduce their emissions by more than 80%.

This GHG strategy has been welcomed by both the industry and other economic organizations. Specifically, the maritime sector is getting an insight into battery powered and hybrid ferries; ships trialling biofuels or hydrogen fuel cells and wind-assisted propulsion.

Kitack Lim mentioned other various universal schemes endorsed by the IMO that merge the industry and member States together in order to encourage the imposition of all associated measures aiming at the reduction of GHG.

Moreover, Kitack Lim met with major shipping stakeholders, active in the battle of fighting climate change; He met with the Executive Director of the United Nations Environment Programme in February this year, Inger Andersen.  and some high-ranking officials of the World Bank in order to consider topics of mutual concern and examine potential coalition endorsing the decarbonization of the worldwide maritime industry as well as all affiliated infrastructure, marine plastic litter and waste management.

During the UN Climate Action Summit, the Global Maritime Forum, the Friends of Ocean action, and the World Economic Forum launched the ‘Getting to Zero’ coalition aiming to a commercially viable zero-emission vessel industry for ships operating along deep sea trade routes by 2030.