IMB: Piracy and armed robbery at lowest level since 1994 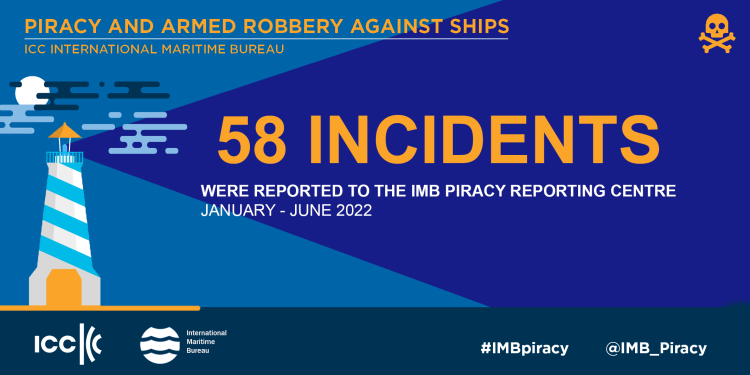 The ICC International Maritime Bureau (IMB) received the lowest number of reported incidents for the first half of any year since 1994.

Not only is this good news for the seafarers and the shipping industry it is positive news for trade which promotes economic growth. But the areas of risk shift and the shipping community must remain vigilant. We encourage governments and responding authorities to continue their patrols which create a deterrent effect

While the reduction in reported incidents is indeed encouraging, the IMB PRC continues to caution against complacency, as vessels were boarded in 96% of the reported incidents. Despite no crew kidnappings reported during this period, violence against and the threat to crews continues with 23 crew taken hostage and a further five crew threatened.

Cautious gains in the Gulf of Guinea

Of the 58 incidents, 12 were reported in the Gulf of Guinea, ten of which defined as armed robberies and the remaining two as piracy. In early April, a Panamax bulk carrier was attacked and boarded by pirates 260NM off the coast of Ghana. This illustrates that despite a decrease in reported incidents, the threat of Gulf of Guinea piracy and crew kidnappings remains.

IMB PRC commends the prompt and positive actions of the Italian Navy which undoubtedly resulted in the crew and ship being saved. It urges the Coastal response agencies and independent international navies to continue their efforts to ensure this crime is permanently addressed in these waters which account for 74% of crew taken hostage globally.

Recently, the Government of Nigeria and a coalition of global shipping stakeholders launched a new strategy to end piracy, armed robbery, and kidnapping in the Gulf of Guinea (GoG).

The strategy establishes a mechanism to periodically assess the effectiveness of country-piracy initiatives and commitments in the GoG. Targeted at all stakeholders operating in the region, it will identify areas of improvement and reinforcement in order to eliminate piracy.

Vessels continue to be targeted and boarded by local perpetrators when transiting the Singapore Straits, which account for over 25% of all incidents reported globally since the start of the year. The perpetrators were successful in boarding the vessels in all 16 incidents reported. While considered low level opportunistic crimes, crews continue to be at risk with weapons reported in at least six incidents.

Outside the Singapore Straits, the Indonesian archipelagic has seen a slight increase in reported incidents for the first time since 2018, with seven incidents being reported compared to five over that same period last year. Five vessels were boarded at anchor and one each while the vessels were at berth and steaming. Weapons were reported in at least three incidents with one crew reported threatened.

Threat subsists in the Gulf of Aden

Although no incidents were reported there since the start of the year, the threat of piracy still exists in the waters off the southern Red Sea and in the Gulf of Aden, which include the Yemeni and Somali coasts. Although the opportunity for incidents has reduced, the Somali pirates continue to possess the capability and capacity to carry out incidents, and all merchant ships are advised to adhere to the recommendations in the latest Best Management Practices, while transiting in these waters.