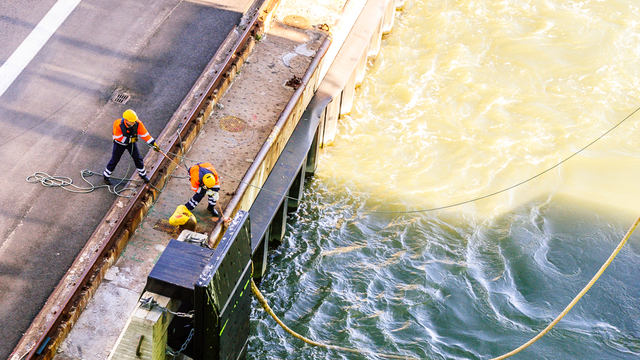 The ILO has issued a second revised edition of Guidelines for flag State inspections under MLC, 2006, as amended. The guidelines are intended to assist flag State administrations to effectively implement their responsibilities with respect to the ship inspection and certification duties under the MLC.

Pursuant to the 2018 resolution of the Special Tripartite Committee established under Article XIII of the MLC, 2006, the guidelines have been updated to reflect the 2014, 2016 and 2018 amendments.

The guidelines are intended to provide supplementary practical information and guidance to flag States that can be adapted to specifically reflect their national laws and other measures implementing the MLC, 2006.

The flag State is required to establish an effective system for inspection and certification of maritime labour conditions on ships that fly its flag (Regulation 5.1, paragraph 2). This involves a wide range of matters
including:

Action to be taken if deficiencies are identified

It is recalled that the national laws and regulations or other measures implementing the MLC, 2006, provisions remain the overriding authority on the applicable requirements for inspections.

The MLC, 2006, sets out a number of possible responses available to flag State inspectors to help ensure that ships comply with those national requirements. Some actions are required while others allow for some exercise of discretion. All actions involve an exercise of professional judgement by the flag State inspector on identifying deficiencies (including those identified during the course of investigating a complaint, as set out in Standard A5.1.4, paragraph 5).

In determining the action to be taken, an important consideration is the question of who is to take the action.

Where authority for verifying compliance with the MLC, 2006, has been delegated to an RO, it is important to remember that the flag State remains fully responsible for the inspection and certification of working and living conditions of seafarers on ships that fly its flag (Regulation 5.1.1, paragraph 3).

The RO must, however, as a minimum be empowered to require the rectification of deficiencies that it identifies in seafarers’ working and living conditions and to carry out inspections in this regard at the request of a port State (Standard A5.1.2, paragraph 2).

Some possible remedies, such as withdrawing certificates, apply specifically to certified ships, others such as detaining a ship apply to all ships and relate to the flag State inspector’s authority to require rectification of the deficiencies before allowing a ship to sail.

In addition, national laws or regulations may enable the flag State inspector or competent authority to impose penalties and other corrective measures on shipowners for breaches of the requirements of the MLC, 2006 (including seafarers’ rights). Action taken is subject to any right of appeal by the shipowner to a judicial or administrative authority (Standard A5.1.4, paragraph 8).

Before a certificate can be issued or endorsed or a ship allowed to sail, the flag State inspector would need to have confirmation either that all deficiencies noted during the inspection have been rectified or that a rectification action plan has been provided by the owner and agreed by the inspector.

As noted in Chapter 2, under Standard A5.1.3, paragraph 11, in the case of a ship that is certified, the results of subsequent inspections (after the first inspection) or verifications and any significant deficiencies found during the verification are to be recorded together with the date when the deficiencies were found to be remedied. This record, in English, is to be either written on the onboard copy of the DMLC or appended to it or otherwise made available in some way for the information of seafarers, flag State inspectors, authorized officers in a port State and shipowners’ and seafarers’ representatives.

In all cases, any deficiencies should be rectified. Rectification of a deficiency related to shipowner use of recruitment and placement services should not, in principle, be to the detriment of the seafarers affected. In some cases a single instance of the deficiency, including a breach of seafarers’ rights, may be sufficient to prevent a ship from going to sea until it is rectified, for example a ship with an underage person working as a seafarer. In other cases, a deficiency, for example, a breach of the lighting requirements in one sleeping room, may be rectified within a period of time.

However, if there is a history of this problem or, if faulty or inadequate lighting in areas including sleeping rooms indicates an overall occupational safety and health problem (meeting criteria in Standard A5.1.4, paragraph 7(c)), a decision may be taken that the ship should not sail until the deficiencies are rectified.

Flag State inspectors will need to use their professional judgement as to whether a ship should be allowed to sail before the deficiency is rectified and, if it is not rectified, to decide on what action to take including withdrawal of the certificate.

See also: Terms and conditions for seafarers’ employment under the MLC

Guidance on making determinations as to action

Depending upon the number and severity of any deficiencies the flag State inspector may consider the following actions:

-refuse to endorse the Maritime Labour Certificate following an intermediate inspection or refuse to renew the certificate.