The International Group has recently published some further revised FAQs on the Maritime Labour Convention (2006). These FAQs reflect the experiences that Clubs have experienced in dealing with MLC matters.

The entry into force of the 2014 amendments to MLC on 18 January 2017 raised a number of questions. These FAQs aim to provide help operators comply with the amendments.

While efforts have been made to provide clarity, uncertainty remains on some aspects of the financial security requirements. There may also be differences in the way some states implement and enforce the amendments

1. What Certification is required?

From 18 January 2017, all ships subject to MLC must carry and display on board two certificates confirming that financial security is in place for:

Ships will need MLC certificates if they are:

3. What is the period of validity of MLC Certificates?

Certificates will follow the period of insurance and will usually run from noon GMT on 20 February for a period of one year. Certificates for the next insurance year will be issued once there is a binding agreement to enter the ship for the coming policy year. Alternatively, Clubs may issue certificates before a binding agreement has been reached providing the Club receives an undertaking from the Member to renew with them or another IG Club.

4. Are payments made to crew under MLC Certificates subject to deductibles?

No. Payments made to seafarers under certificates are not subject to deductibles.

5. What constitutes abandonment pursuant to the MLC?

The Clubs’ obligation to pay, for example, a seafarer’s repatriation and outstanding wages under the Certificates only arises when the seafarer is deemed to have been abandoned by the shipowner.

According to the MLC Regulation 2.5 Standard A2.5.2 paragraph 2, a seafarer is deemed to have been abandoned where the shipowner:

6. What is the liability for wages and what is meant by “wages”?

The security required under Regulation 2.5 is for up to four months’ owed contractual wages and entitlements.

MLC contains definitions of “basic pay or wages” and “consolidated wage” in Guideline B.2.2 but neither of these terms is used in the context of financial security. The term “entitlement” indicates that the seafarer must have a legally enforceable right to recover the amounts claimed. Financial security would respond for wages and other items such as overtime where these are legally due, but not otherwise.

7. Can liability under MLC Certificates be terminated by the Club?

Yes. MLC permits the termination of the financial security on at least 30 days' notice by the issuer to the competent authority of the Flag State11 . If notice of termination is not given, the security remains effective.

8. Is the risk covered by the Rules?

Liability for disability due to occupational injury under Regulation 4.2 will normally fall within the scope of standard crew cover under the Rules. Repatriation and unpaid wages will be covered under the Rules in some cases, including when due to a shipwreck. However, repatriation and overdue wages fall outside the scope of P&I cover when arising from abandonment under Standard A2.5.2 due to, for example, a shipowner’s financial default.

9. How are wages and repatriation costs under Standard 2.5.2 covered, if outside the scope of Club cover provided under the rules?

The MLC Extension Clause provides that Clubs will discharge and pay claims made by seafarers pursuant to the certificates. The Clause imposes an obligation on Members to reimburse their Club if the claims which the Club has paid to seafarers fall outside the scope of cover provided by the Rules. This is on the basis that Clubs will want to take measures to minimise the risk of bearing the financial consequence of shipowners abandoning their crew.

10. Can the Club rely on any insurance exclusions?

It has been accepted that certain limited exclusions can be relied upon. These are referred to in the MLC Extension Clause which is available on all Club websites and relate to war, nuclear, bio-chem and cyber risks and sanctions.

For more FAQs regarding MLC, click the following PDF 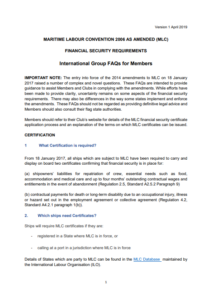