IFC: What to know about perpetrators attacking vessels in Singapore Strait

Singapore's Information Fusion Centre (IFC) reports of an increase of sea theft and attempts of robbery along the eastbound lane of the Traffic Separation Scheme in the Singapore Strait from October 1st to November 9th,  2020 with nine incidents (three sea thefts and six attempted actions).

It is highlighted that perpetrators target bulk carriers and tankers during PoD (2130hrs to 0500hrs during hours of darkness/ minimal illumination).

As the IFC has already mentioned, incidents typically involved three to five perpetrators that may be armed with long knives.

Trending of incidents suggest the same group of perpetrators might likely target a few vessels in the same night to maximize their gains in the future.

The IFC recommends the following measures to be implemented while transiting or anchored.

Concluding, you may learn more by clicking on the report herebelow: 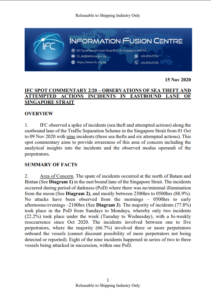