Following the devastating hurricane Dorian, all ports in the Bahamas reopened and are operating in Nassau. Yet, officials reported that relief procedures are beginning to accelerate because the supplies in some of the most impacted areas are running low.

The USCG has deployed 14 helicopters, 10 airplanes and three cutters to the Bahamas. In the meantime, in the rescue operations, the US Air Force is dispatching three C-130J cargo aircraft from the Rhode Island Air National Guard to provide transportation, and U.S. Customs and Border Protection has been providing helicopter flight services for aid delivery and medical evacuations.

Private aid efforts also have a positive impact in the situation, as many were the cruise lines that provided hurricane relief after the storm. Also, about 20 private fishing vessels and pleasure boats sailed from Pompano beach transmitting relief supplies for Grand Bahama island. The effort was organized by Offshore Anglers of Pompano Beach, with support from a wide array of South Florida businesses and individuals.

In the meantime, Resolve Marine, a Florida-based marine salvage company, announced that they will provide one of its barges to deliver reverse-osmosis water purification plants to the Bahamas, along with one million gallons of potable water. 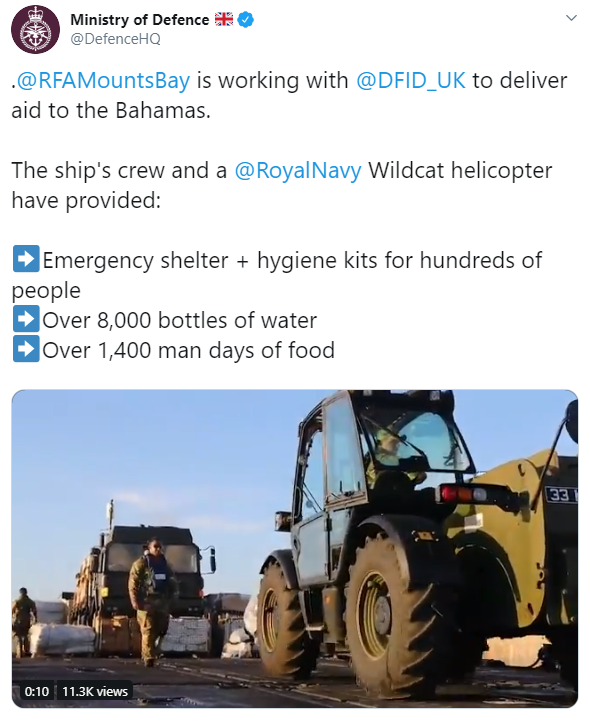 Also, Equinor announced that it will clean up the spills from the South Riding Point oil terminal in the Bahamas, which was damaged by the Hurricane.

Overall, Dorian caused disruption to several cruise ships' routes in the last few days to avoid the Tropical Storm. In the meantime, following the devastating aftermath of Hurricane Dorian, the Port of Savannah is now open and operating with a 36-foot draft restriction, while the Ports of Brunswick and Charleston remain closed to commercial operations.

According to reports, Hurricane Dorian was the strongest storm of the Atlantic hurricane season so far.