Human Rights At Sea proposes amendments to the draft agreement under the UN Convention on the Law of the Sea (UNCLOS) on the conservation and sustainable use of marine biological diversity of areas beyond national jurisdiction to include International Human Rights Law.

While human rights are not the focus of the draft agreement, the charity believes the agreement should explicitly refer to the applicability of international human rights standards in its implementation. There is an increasing recognition internationally that environmental issues and human rights are inextricably linked, and this is the case as much at sea as it is on land.

The amendments proposed by HRAS are the followed:

Given that the drafts focus on the conservation and marine bio-diversity aspects of the proposed treaty, the safety of the human element is missing, leaving a gap for the protections of the people who will be required to ensure the treaty’s success at sea.

Human rights apply at sea as they do on land, but there still remains a gap in the legislative framework concerning the laws of the sea which does not explicitly refer to international human rights law.

In light of the proposed amendments, Human Rights at Sea Founder, David Hammond, added that this is the best opportunity to update the international Law of the Sea regime to become wider in effect, supporting all people living, working, transiting or engaged in any kind of activity in the sea. 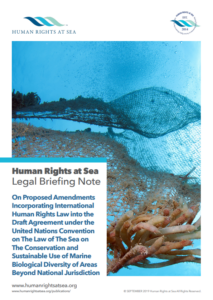