HRAS comments on citizens’ criminalization of SAR in Med Sea

Human Rights at Sea published a new briefing note on the ‘Legal and Policy Matters Arising from the Increased Criminalisation of the Civil Society Search and Rescue Activities in the Mediterranean’. This is the second publication on the issue of the increasing levels of criminalisation of civil society search and rescue (SAR) organisations.

The Briefing Note follows up from the recent Human Rights at Sea independent review of the case of the de-flagging of the M/V Aquarius. The rescue ship had been blocked at the port of Marseilles in France since September, as it could not find a country to register its trips to the Mediterranean, after the Panama Maritime Authority revoked its registration.

The Briefing Note highlights, through examples, the current and worrying trend in some EU Member States to actively seek to criminalise citizens acting as humanitarians, and who provide life-saving assistance to those in distress at sea.

Human Rights at Sea was the first maritime-focused human rights organisation in 2016 to raise awareness of potential criminalisation of SAR volunteers in its publication: Volunteer Maritime Rescuers: Awareness of Criminalisation.

This was released in response to the then perceived and emerging threat by some European Union Member States to start to criminalise civil society rescuers then undertaking lawful and necessary humanitarian relief work in the Central and Eastern Mediterranean.

In response to some EU leaders' actions to guarantee their territorial control putting lives in danger, HRAS commented:

EU states have...regrettably prioritized their national interests over their international obligations, thereby further eroding the heart of the idealized unified European model that is founded on the respect for fundamental human rights and the rule of law. 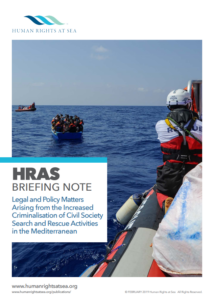