Above image is used for illustrational purposes only

How the invasive species threaten the British biosecurity

In April 2019 the Environmental Audit Committee (EAC) in the UK launched a new research to understand the impact and threat to biosecurity from invasive species where the UK is witnessing a rise in the introduction of non-native species, with damaging effects from invasive species estimated to cost almost £1.8 billion a year.

In light of the above, the IMarEST has provided input to the study, focusing on the impact and management of non-native species, that are severely affecting the UK's native biodiversity and ecosystems, as well as public health.

Specifically, invasive species are posing the greatest harm to:

The risks of invasive non-native species migrating to the UK from future climate change:

The Association notes that the UK has been experiencing an increase in arrivals  of terrestrial species that appear to have flown from mainland Europe, with 25 such species arriving between 1995-2012.

Actions to be taken by the UK to mitigate the risk, or adapt to, climate migrations of invasive species:

How does the risk of trade and future trading relations brings non-native invasive species to the UK be mitigated:

In the possibility of the Brexit, there is the potential to implement more targeted, better resourced, and stricter biosecurity rules and regulations.

This could be carried out through stricter border checks, tighter permit requirements, and restrictions or bans on certain high-risk imports to the UK. 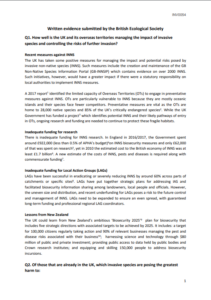