How a decline of Pound could affect UK ports

The British Ports Association (BPA) and Currency UK, published a report on the decline in the value of the pound. The publication plots sterling against the US dollar and the euro and explores three aspects on the economy: exports, energy and infrastructure.

As Brexit is nearing, the way that this will happen is still uncertain. According to the report, this means that fluctuations in the value of pound on the international currency market continues to be a recurring theme.

"This can represent real opportunities for international investors and currency traders but can also create unpredictability for those in the shipping, freight and ports business, which facilitate 95% of the UK’s physical trade."

In the short term, a fall in the value of the pound could inject an initial boost into UK exports. However, for many sectors, this is not so clear. Several materials used in UK manufacturing are imported from the EU and beyond and a lower exchange rate will make these components more expensive. This could make UK manufacturers source from domestic suppliers, which is good for UK businesses, but could also drive down the UK’s international trade, making shipping less efficient and more costly.

Pertinent to the discussion is commercial fishing activities and landings in ports around the British coast. Normally, deep sea fishing vessels look at where they can get the highest market price for the fish they land in the UK and elsewhere as well as other factors such as fuel prices. Now, a lower value of the pound could mean it is more sensible to land abroad. If this were ongoing, it would not be good for communities and businesses with a strong fishing focus.

As with trade, there are various implications sounding a lower value of sterling for wider parts of the ports and maritime industries. Much of the UK’s ports business focuses on energy production and supply, like oil, gas and renewable energy markets. As oil is traded in US$, higher values can mean the exploration of North Sea fields and related activities becomes more profitable. This, alongside any global increase in the barrel price, can lead to more maritime activity for example, in regions such as Northern and Eastern Scotland.

Shipping fuel and bunkering can also be affected, as well as other maritime-related activities. In the meantime, the UK has announced the Offshore Wind Sector Deal which sets ambitious targets for the UK to produce 30% of its electricity from wind energy and associated UK ‘content’ aims could mean further development and private investment in and around ports.

During 2018, the British Ports Association conducted a study, finding that there was £1.7bn worth of port infrastructure development projects in the pipeline. Some of this will be provided by international investors and they will consider the strength of the pound compared to other currencies. As a result, a lower value of the pound might make investments more likely.

The report concludes by noting that in spite of a recurring theme of uncertainty, one thing likely to change due to the currency fluctuations is the complex purchasing patterns of UK manufacturers and businesses, as well as international business streams and foreign investment in the UK.

Read more details in the PDF below 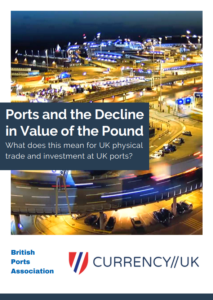