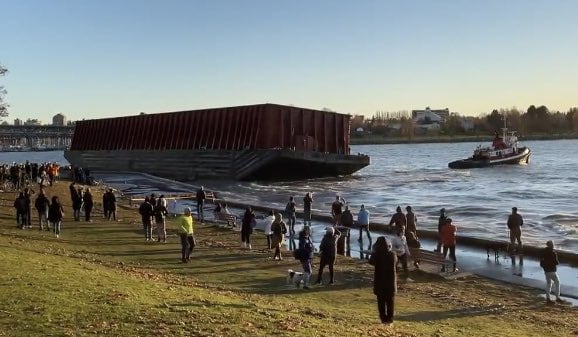 A giant barge has smacked into Vancouver’s seawall, just short of the Burrard Bridge after becoming unmoored in Monday’s rain and wind storm.

The Canadian Coast Guard said the barge owner is aware of the grounding and has planned to retrieve it as soon as possible. The owner will be responsible for securing, salvaging and arranging a tow for the barge.

The barge initially appeared to be heading toward the Burrard Bridge, but ran aground at Sunset Beach.

The City of Vancouver closed the Burrard Bridge at 7 p.m. Monday, in case the barge comes loose and collides with the bridge. It says an attempt to remove the barge is planned for high tide on Tuesday afternoon.

The coast guard said it is not aware of any people on board or any risks of pollution. There are no hydrocarbons on board.

Transport Canada, which is now the lead federal agency helping to co-ordinate the removal plan, reiterated Wednesday that there is no threat of pollution from the barge, which is empty and had previously been used to carry wood chips.