On November 4, 2019, Elka Aristotle, a Greek-flagged oil tanker anchored in the port of Lome in Togo, West Africa was attacked by a group of armed pirates. The pirates abducted four of the twenty-four crew members on board. The kidnapping incident occurred only two days after a separate event where nine crew members were abducted from a Norwegian-flagged bulk carrier that was anchored off the coast of neighbouring Benin.

Shortly more than a month after the kidnapping off Elka Artistotle, three were freed while the fourth hostage died from illness during captivity, without full details of the demise reported. Just recently on December 15, 2019, six pirates boarded “Duke”, a Marshall Islands-flagged tanker and abducted 20 crew members, making it the largest piracy incident for 2019.

The past year has seen a dramatic rise in piracy attacks around West Africa. With more than 70 incidents in 2018, Nigeria has overtaken Indonesia as the top global hotspot for piracy, accounting for almost one in four cases worldwide.

Today, maritime piracy remains an utmost concern for world trade and the shipping industry. While the International Maritime Bureau (IMB) may have reported fewer piracy and armed robbery attacks against ships for the third quarter of 2019 as compared to 2018, the number of attacks involving the use of dangerous weapons such as guns and knives have remained high. In third quarter of 2019, 35 gun-related and 24 knife-related incidents were reported, compared to 37 gun-related and 25 knife-related incidents in 2018. These statistics re-affirmed the continued threats to the safety and personal well-being of the seafarers.

In the long journey over the vast oceans, fatigue, human error, and even negligence are all potential weaknesses exploited by pirates for mission success. The modus operandi of pirates typically involve them stalking their victims in very small boats that are typically hard to detect or even invisible to common commercial navigation radar carried by merchant ships. The attacks typically occur in the dark of the night between 0000 and 0459 hrs, where crew vigilance is at the lowest. Hence, if crew members could have situational awareness of all vessels in their vicinity and be alerted to vessels behaving suspiciously in their vicinity or making a head-on approach to their ship, ship crew could prepare themselves to ward off the attack.

Such situational awareness and early warning could be realized by harnessing the latest signal processing technology to enhance radar performance for real-time monitoring of the vessel’s surroundings. Behavioural analytics, a holistic analysis performed on the tracks of all vessels in the vicinity of the host ship, will call out suspicious loitering and shadowing behaviour, greatly enhancing the situational awareness of ship’s crew.

AgilTrack Maritime Anti-Piracy System (MAPS) developed by ST Engineering, a Singapore-based conglomerate with deep expertise in Maritime defence, is a round-the-clock surveillance system to protect vessels against piracy and theft. AgilTrack uses both track-before-detection (TBD) technology and constant false alarm rate (CFAR) to pick up weak radar signals and small targets. These two fused data when combined with behavioral analytics module creates a powerful detection and tracking tool that detects suspicious behaviour. In a way, commercial navigational radar installed on typical vessels is transformed into a sophisticated and surveillance-capable radar.

AgilTrack MAPS equips vessels with a surveillance form of protection that triggers alarms and automatically slews cameras to allow crew to exactly pinpoint the direction of attack. Crew can identify and verify intrusions from the user interface, giving them time to respond and counteract to pirates’ advances.

AgilTrack has the capability to interface with other piracy deterrence methods like search beams, water cannons or long range acoustic device. 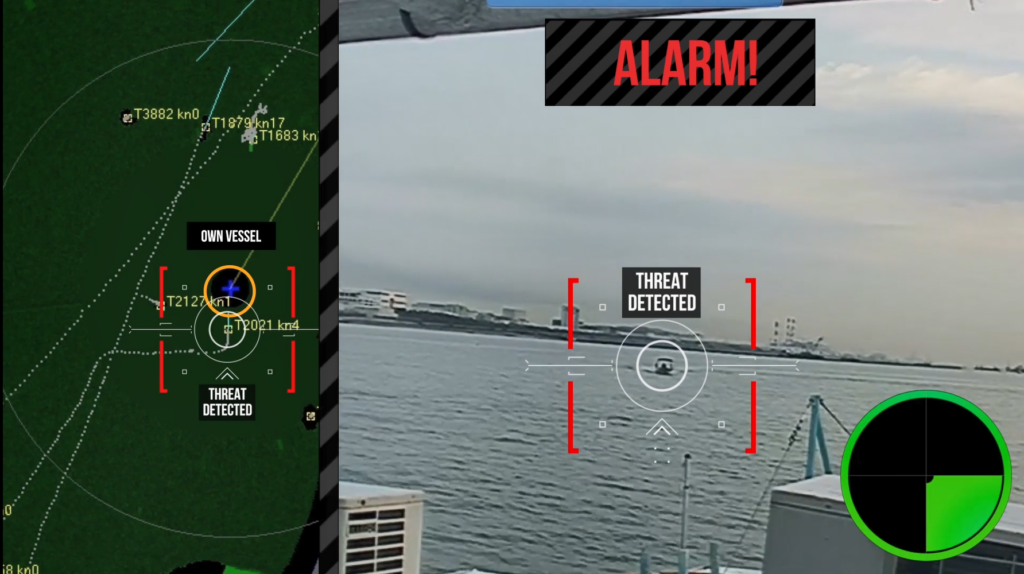 AgilTrack MAPS detects threats and activates camera to lock on to targeted threat.

“Though employing private armed escorts can improve the defence of ships against pirates, they can still be overwhelmed by surprise attacks that were not detected a priori. Our objective is thus to equip the ship crew and their escorts with an early warning system against potential threats, using our proprietary track-before-detect technology to detect and track targets down to very small non-metallic boats, and performing behaviour analytics to call out suspicious and threatening behaviour.. Our development team works closely with various concerned parties in the maritime community, such as fleet operators and ship captains, to understand the dangers and threats they faced, and address their special needs and requirements for maritime safety and security. Using our expertise in radar technology and analytics, we developed our solutions tailored to their needs”, says Mr Goh Wai Pheng, EVP/General Manager of ST Engineering.

Despite coastal states constantly focusing their efforts of enhanced surveillance at ports and anchorages, increasing patrol and contact with ships transiting the area, piracy is and will still remain a serious threat to the shipping and transport industry. ReCAAP ISC advises seafarers to exercise vigilance and maintain an all round lookout for suspicous boats in the vicinity. Besides that, by utilising advanced maritime technology that provide early warning on piracy attempts will enhance ship’s surveillance, safeguard ship’s crew and high-valued cargo and assets, and ensure safe navigation routes.

Time is of the essence in warding off piracy attacks. Success in fighting off pirates goes to those who have been pre-warned and thus, well-prepared.

For more information on how MAPS provides early detection and warning on suspicious piracy vessels through smart mobility tracking and in-depth behavioral analysis, email us at agiltrack@stengg.com or visit our website.