The guidance presents several safety steps so that a vessel is able to efficiently handle dangerous goods.

In general, containerships have been subject to major fires through years, leading to loss of life, harm of the environment and damage or loss of cargo and property.

The document aims to address onboard dangerous goods stowage considerations to improve the SOLAS and IMDG requirements.

Cargo-related incidents that lead to fire or explosions are rooted in cargo problems. Investigations, litigation and inspections mark various deficiencies in relation to cargo presented for shipment, also including:

The report highlights that cargoes that are not compliant with national ad international requirements oppose great risk to all stakeholders involved in their transfer.

Also, specific commodities that are not subject to the provisions of IMDG are known to present heightened risks onboard ships and have more possibilities to be subject to greater scrutiny.

Additionally, according to IMDG, the dangerous goods are categorized in nine classes and then are further divided, based on their predominant type of hazard they represent.

Class 4.3:   Substances which, in contact with water, emit flammable gases

In addition to the dangers expressed above, dangerous goods carried on containerships should be safely stowed.

Therefore, the report presents 6 goals and their sub-goals as functional requirements so that stakeholders have a directional line to follow.

Reduce risk of exposure to crew, risk of isolation of crew on ships due to obstructed means of escape, risk of fire, explosion and/or toxic hazards affecting the life‐saving appliances and provide a safe distance and additional time for emergency response

To achieve the steps above, the report recommends to

It is also of a great importance to reduce the risk of cargo fire or explosion exposure to the engine room.

This can be achieved by:

To achieve this, the report proposes to avoid fires which may lead in structural damage especially in the midship part of the ship, which is more vulnerable in comparison to other parts.

To avoid the fires below the deck, one should consider avoiding potentially large fires escalated from block stowage of Dangerous Goods and higher risk cargoes.

A step could be to avoid any exposure to heat, such as direct sunlight or heated fuel tank.

To reduce the possibility of a smoldering fire escalating into a severe fire, one should stow higher risk cargoes and self-reacting commodities specifically and appropriately. 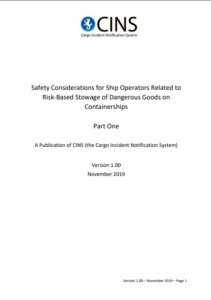