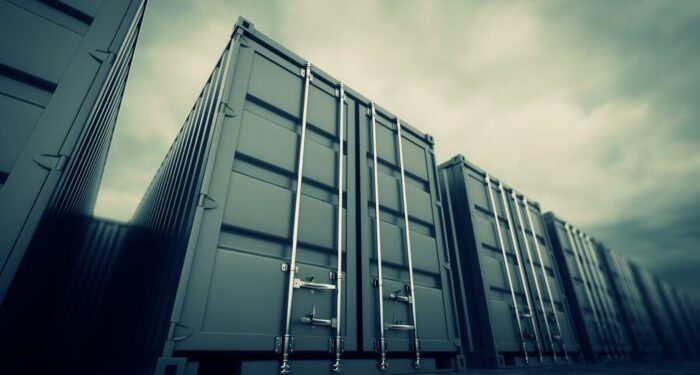 ABS has issued a guide for the certification of container securing systems advising that when special containers are used for unique cargoes that have reduced or increased load capacities, limitations should be considered when stowing them onboard ship and when determining permissible tier and container stack weights.

In fact, the scope of this guide contains provisions for the certification of container securing systems installed aboard vessels classed by ABS including but not limited to:

Surveyors are advised to undertake all surveys on container securing systems upon request, with adequate notification, of the owners or their representatives, and are to report to the Committee. Adding to this, if there is a need for further examination, the owners or their representatives will be notified immediately in order to take appropriate action.

all devices and other elements used to secure containers onboard a vessel, whether they are fixed to the hull structure or loose fittings, are to meet the minimum strength requirements.

It is noted that in the sea, the changing direction of the accelerations acting on the containers and the gaps in most fittings securing the containers create a system where components do slide on one another can result in significant abrasion and wear.

Adding to this, it is recommended that all loose components be inspected and inventoried regularly. If any loose components are found defective, they shall be marked and removed from service. Fixed securing devices are to be visually inspected regularly for damage such as cracking or deformation that would make them inoperable or incapable of transmitting load to the hull structure.

The securing systems and associated vessel support structure shall be evaluated for these loads in order to determine the operation envelope of the container stacking arrangement.

Remarkably, the determination of the forces imposed on each device or element is discussed in Section 6, “Securing System Design Principles”. The selection, arrangement, and use, of the devices shall also be in accordance with the guidance given in Section 5, “Container Securing Arrangements”. Instructions for proper installation, use, inspection, maintenance, and lubrication of securing components are to be included in the Container Securing Manual in Section 9. It is important to note that in a seaway, the changing direction of the accelerations acting on the containers and the gaps in most fittings securing the containers create a system where components do slide on one another. This can result in significant abrasion and wear.

Furthermore, ABS counsels that as most containers greater than 40-ft in length have stacking posts at locations offset from the end walls that match the spacing of the corner posts on 40-ft containers.

This facilitates the stowage of these longer containers over the top of 40-ft containers, or any containers with stacking posts at 40-ft spacing, or at hatch locations with 40-ft base sockets.

Over-wide containers, such as 48-ft containers and 53-ft containers also typically have special fittings at the top and bottom of the stacking posts that have apertures with a transverse separation that matches the standard width container.

These longer containers with the 40-ft stacking posts permit a wide variety of mixed length stack configurations. There are limitations based on the ability to operate twist locks and apply lashings, but considerable variability still exists where the containers are supported from below and loaded from above, a function on where twist locks are placed, and lashings applied.

When designing the securing system, the location of support at the bottom of the container and application of load at the top of the container becomes critical for these longer containers. The capacity of these containers to support vertical loads can be limited if the support is at a stacking post while the load is applied at the end wall, or vice versa.

The compressive strength rating of a container in such a situation can be much less than that of the strength of the end wall corner posts. The stacking posts are also usually less robust than the corner posts and can support less compression even when loaded and supported at the same post. Because the stacking posts in the side wall do not provide a direct load path to the aperture at the standard spacing, there is a moment induced in the bottom fitting unless a special extra-wide twist lock is used.

What is more, it is advised that containers used for the transport of unique cargo with unusual or non-standard dimensions and structure and with reduced racking strength or racking spring characteristics shall be evaluated separately and shall be clearly defined in general stowage operations. It is good practice to stow containers with reduced racking strength within cell guides or in the uppermost tiers on deck where racking loads are not severe.

Containers that have one or both doors removed for the transport of special cargoes shall be assumed to have reduced racking strength and shall similarly be stowed within cell guides or in the uppermost tiers on deck.

Lastly, container Strength Tests shall be conducted on prototypes of unusual containers to establish the permissible values for the strength parameter; such testing shall follow the procedures and requirements as described in the ABS Rules for Certification of Cargo Containers.

In November, ABS launched the “Guide for Fire-Fighting Systems for Cargo Areas of Container Carriers”, presenting a number of notations with guidelines, addressing firefighting and safety systems of cargo holds of container vessels, the location of a series of high-profile fires onboard.

Further to this, in November ABS has also issued guidance specifying their requirements for obtaining the class notation “LNG Cargo Ready”, to be applied to liquefied gas carriers as Ethane or Ethylene carriers, that have been designed and constructed for possible future carriage of LNG cargo.

To find out more about the guide for the certification of container securing systems, you can click on the PDF bellow. 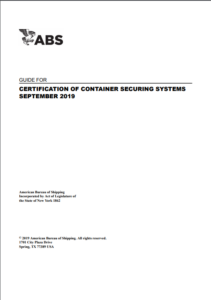