The Club comments that "we have seen several salvage claims being raised against vessels sailing through the Turkish Straits. Each claim has been in the region of USD 1 million. The salvages were not a result of the vessels losing manoeuvrability, but tugs were connected because the vessels’ speed over ground dropped below 4 knots."

In addition, the report includes guidance for masters and owners in case of engine breakdown. Specifically: 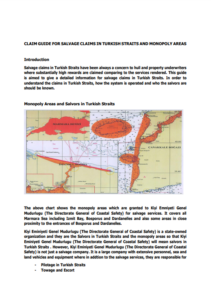 Claim guide for salvage in turkish straits and monopoly areas