Guidance on fuel-compliance during PSC inspections for 2020

The North P&I Club issued a guidance in light of the upcoming 2020 sulphur cap, to help vessels be complaint with the fuel requirements of each port when being inspected by port state control authorities; Thus, the Club informs on what to expect when calling ports in different states.

#1 PSC target vessels based on their risk

Also, PSC may also target a vessel if they are alerted by a third party, such as a pilot, or by ‘sniffing’ devices that detect stack emissions.

Except IMO's PSC guidance, the inspection depends on the factor whether the vessel has an exhaust gas cleaning system (EGCS) installed, and this may be different from state to state.

PSC inspectors will ask to see several documents, as:

North alerts that if the port State believes that the vessel and its equipment are not in line with the documentation or if the crew seems unfamiliar with the operations, then a more thorough inspection will follow.

In the meantime, when a ship is not equipped with an exhaust gas clean system (EGCS) or the use of it is banned form the port, then the PSC are likely to check that its fuel is compliant.

This may require testing of: 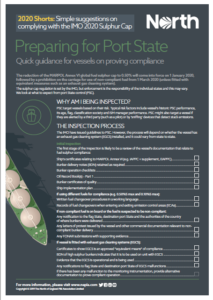